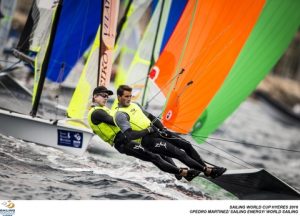 It’s game over in the 49er at Sailing World Cup Hyères with Peter Burling and Blair Tuke (NZL) taking their 26th consecutive victory ahead of Sunday’s televised Medal Races.

The Kiwis look unstoppable in the 49er and even though they ended up capsizing and taking a 28th on Saturday, no one could match their consistent scorecard across the week. They head into the Medal Race with an unassailable 48-point lead.

Sailors were made to wait for the wind in the morning but the north westerly built as the day progressed. All but two of the 29 scheduled Olympic fleet races were completed as sailors fought for a spot in the top ten to progress to the Medal Races.

Whilst many fought tooth and nail to make the Medal Race for Sunday’s live broadcast, Burling and Tuke will sail round the course knowing the job is done. Fans will be able to watch them live at 13:50 CEST with the whole show commencing at 11:00.

Information on how to follow and embed is available below:
URL – https://youtu.be/8HNURakIT7o
Embed – <iframe width=”560″ height=”315″ src=”https://www.youtube.com/embed/8HNURakIT7o” frameborder=”0″ allowfullscreen></iframe>

The question of the week at Sailing World Cup Hyères was, ‘can anyone stop Peter Burling and Blair Tuke on their quest for Olympic glory?’ Evidence suggests the answer to that question is a resounding no as they made it 26 consecutive wins. Simply outstanding.

Not even a couple of capsizes could halt them and they take a 48-point lead into the Medal Race. The 49er completed three races and the Kiwis notched up a 10-1-(28). The pair were black flagged in the final race of the day but the breeze completely died resulting in an abandonment. Even if the race concluded, they would have still taken a winning margin into the Medal Race.

Getting carried away isn’t in Burling and Tuke’s nature. They remain grounded, modest and most importantly, focused on what’s ahead, no matter how much the world’s press builds them up to be Olympic champions in waiting, “Obviously we are really happy with how we have been going, ” explained Burling, “but we have a lot of hard work to do over the next three or four months just to finish it off and finish off the final detailing.”

A 28th and a black flag is rare for Burling and Tuke and whilst they laughed it off back ashore, they won’t want a repeat at Rio 2016, “If Rio was tomorrow, I don’t feel like I think we are ready yet. We still have plenty in the tank and we’re looking forward to the challenge, ” concluded Burling.

The story for the Medal Races will be the fight for the remaining podium spots and internally between the British 49er sailors. The silver and bronze occupants are Will and Sam Phillips (AUS) on 92 points and Jonas Warrer and Christian Peter Lubeck (DEN) on 94 points.

Great Britain’s James Peters and Fynn Sterritt are the leading British crew on 100 points with Dylan Fletcher and Alain Sign and John Pink and Stuart Bithell nine points behind. The British Rio 2016 spot is still up for grabs and selectors are in town, keeping a close watch over the racing.

Lisa Ericson and Hanna Klinga (SWE) held on to their lead in the 49erFX but only via countback. They are tied on 58 points with Martine Grael and Kahena Kunze (BRA) ensuring an exciting finish.

Annemiek Bekkering and Annette Duetz (NED) enter the Medal Race in third place having qualified to represent the Netherlands at Rio 2016 with their outstanding week.

The Polish RS:X squad use Hyères as a training base year after year to kick start their season. Over this time, they have managed to to assert their dominance on the French waters to be regular podium finishers in both the men’s and women’s fleets.

In the Rio 2016 quad they have owned the men’s Hyères podium. Gold and silver in 2013, a clean sweep in 2014 and a silver last year backs that up and they have also continuously remained in contention in the women’s, securing top results in the Rio 2016 quad. What they lack is two gold medals in the men’s and women’s fleets at the same time. 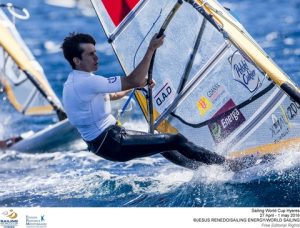 Flash forward to Hyères 2016 and that challenge could soon be ticked off the to do list with Piotr Myszka and Zofia Noceti-Klepacka leading the men’s and women’s divisions heading into the Medal Race.

Myszka is three points clear of his compatriot Pawel Tarnowski after a 9-3-5 on the day and he simply puts the Polish team’s success in Hyères down to being familiar with their surroundings, “I feel really comfortable here, ” explained Myszka. “Hyères, for me, is always the beginning of the season after all the training beforehand. I really enjoy sailing and racing here and I’ve won it twice.” 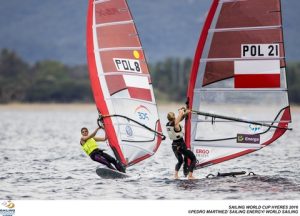 Klepacka is six points clear of Bryony Shaw (GBR) venturing into the Medal Race and much like Myszka has years of experience and knowledge behind her, “I’m really excited to be here, the first time I was here was in 1997, 19 years ago. A few days ago I celebrated my birthday and I still enjoy coming here, training with my friends. It’s always windy and it’s a great spot to prepare for a world championship or an Olympic Games.”

Both the Men’s and Women’s RS:X Medal Races will be broadcast live on the World Sailing TV YouTube Channel. The men will start at 14:25 with the women following at 15:05 so be sure to tune in to see if the Polish can make it two out of two.

Croatia’s Sime Fantela and Igor Marenic simply have to complete the Men’s 470 Medal Race to defend their title. A first, sixth and a discarded 12th enabled them to open up a 19-point lead over Mat Belcher and Will Ryan (AUS) who were not as consistent as the Croatians. Starting the day with a 21st, which they discarded, they were forced to count a 17th from the third race. A 14th and a bullet followed but it was simply too late for them to get close to the Croatians who finished in the top six in all but one race across the week.

Belcher and Ryan will have to keep an eye on the chasing pack. Anton Dahlberg and Fredrik Bergstrom (SWE) trail them by two points with Lucas Calabrese and Juan de la Fuente (ARG) four off.

It’s tight at the top in the Women’s division with Camille Lecointre and Helene Defrance (FRA) and Hannah Mills and Saskia Clark (GBR) separated by a single point.  Both teams had a mixed day with two keepers and one double digit score which they discard.

Overnight leaders Fernanda Oliveira and Ana Luiza Barbachan (BRA) drop down to third but are just four points off of the leaders, fully in the hunt to defend their title.

Philipp Buhl (GER) made a late charge in the Laser, claiming a first and fourth to draw within four points of Tom Burton (AUS). Burton will take a five-point lead over Buhl and his compatriot Matt Wearn (AUS) into the Medal Race. Sam Meech (NZL) is one point off of Buhl and Wearn.

In the Laser Radial, Josefin Olsson (SWE) stole the lead off of Evi Van Acker (BEL) recording a 3-2 compared to the Belgians (9)-6. Olsson and Van Acker are separated by two points and have an unassailable advantage over Alison Young (GBR) in third. It’s set fair for a straight shoot between the Swede and the Belgian in the Medal Race. 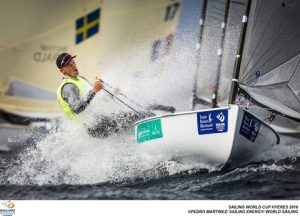 If Jake Lilley (AUS) wins on Sunday in the Finn class, he would have done his Rio 2016 selection chances the world of good.

He was the king of the downwind, taking a comprehensive victory and is seven points clear of Anders Pedersen (NOR).

The young Norwegian is closing in on his first Sailing World Cup medal and if that wasn’t enough to cheer about, he has also met the criteria of his National Olympic Committee to qualify for Rio 2016. On his day he said, “The wind kept building when we got out and when we finally started we had a solid breeze. I had good speed and worked my way out to the left and got some good pressure and led at the first mark.”

“Jake caught up on the downwind and we fought up the second beat, with Jake in the lead. I had some trouble with a nosedive on the last downwind and lost two boats, but it could have been a lot worse, so I’m happy with the day.”

Pedersen has close company though with four points the difference between himself Ivan Kljakovic Gaspic (CRO), Josh Junior (NZL) and Oliver Tweddell (AUS).

Ben Saxton and Nicola Groves (GBR) and Vittorio Bissaro and Silvia Sicouri (ITA) are locked on 73 points apiece heading into the Nacra 17 Medal Race. Fernando Echavarri and Tara Pacheco (ESP) are just two off the leaders.

Race victories on the penultimate day were shared across the fleet with Thomas Zajac and Tanja Frank (AUT), the Spaniards and Jan Hauke Erichsen and Lea Spitzmann (GER) crossing the line first.

The forecast for Sunday is for big breeze. Medal Races are scheduled to commence from11:00 local time.