Japan is riven by social fallout of earthquake and tsunami… 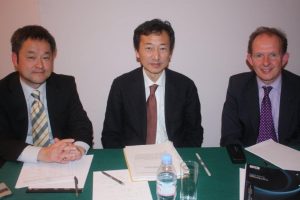 Japan is riven by social fallout of earthquake and tsunami, Daiwa Foundation seminar in London hears

Among grievous impacts of the 2011 Great East Japan earthquake, which triggered a tsunami and the world’s worst nuclear accident since Chernobyl, was the breaking of a community’s close links with the sea.

Much social dislocation persists five years after the disaster.

The nation still struggles to come to terms with the cumulative fallout, in terms of worries about nuclear policy, and how to restore confidence in the area around the battered Daiichi Fukushima plant. In the catastrophe, extensive flooding, landslides and fires killed 19, 000 people, and 160, 000 residents were forced to abandon their homes amid radiation fears.

Conflicting views about the strategy and progress of the local recovery drive were aired at the latest event in the Daiwa Anglo-Japanese Foundation 2016 seminar series. At the foundation’s London premises, with the title Finding a Balance, the seminar posed the question whether, following the “concentrated reconstruction” carried out since March 2011, more should be spent in the next five year stage on regenerating an area that was already in decline before the tragedy struck. The next five-year stage bears the official title of Reconstruction and Revitalisation, and will be aimed at recovering a radiation-free environment and redeveloping a sustainable local economy, revitalising Fukushima for its future residents.

Speakers and experts in the audience at the seminar said that to date, the reconstruction programme had failed to remedy the social disruption suffered especially by the elderly who were evacuated to temporary housing.

The meeting was told of the division in Japan between those who said that as the area was already depopulating, it would never be ‘reconstructed’ in any true sense, and it was unwise to spend taxpayers’ money on such a project; and those who said that the government has a duty to support people who want to return to their homes, by reconstructing local economy and infrastructure.

Henry Tricks, energy and commodities editor of The Economist who was the magazine’s Tokyo Bureau chief from August 2009 until April 2013, said that it became clear early on how tough the reconstruction was going to be. He recalled that soon after the quake he went to a fishing village which had been flattened and interviewed two elderly men.

What the men told him revealed why the future is so difficult for local people. One was an oyster fisherman who had become rich on the back of owning one boat.  When the catastrophe struck, he assumed his wife knew what to do to reach safety, so he took his boat out into the bay. He returned to find the village destroyed, and spent days digging through the ruins, as his priority was the community. That was the side of Japan that looks ahead: no time for pity, work your way through the problem and move on.

The other man was totally different. His family was completely bound up in village life for generations.  He saw the jetty cut in two by the quake. He loved the sea for its beauty. He considered that the village was dying before the tsunami struck. His children were losing their connections with it: his daughter wanted to run a rock ‘n roll band in Tokyo and his son worked as an insurance salesman in Sendai. This was really a village in severe demographic decline beforehand, said Mr Tricks. 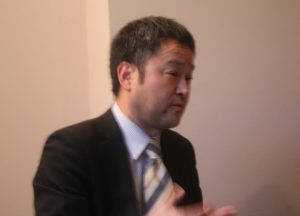 People wanted to live by the sea.  There was an extraordinary love of the sea in that area. It was really striking that people who lived along the coast saw it like a bank that just rolls out steady income, year after year, like a cash machine. In the city of Kesennuma which was severely damaged by the disaster, someone had on his business card the motto “Kesennuma will not despair as long as there is sea.”

Mr Tricks spoke of a generation that believed technology could eliminate risk. There were no back-up generators, and maps ignored the fact there was a huge tsunami 400 years ago in the area. In the village they had a sea wall that was only as good as the last tsunami. “At the end of the day you have to mitigate and manage risk, you cannot eliminate it altogether.”

In fact, he continued, a sea wall breaks the link between the community and the sea.

For young families who were evacuated, the idea of going back was more and more remote, and the children liked being in the city that was now home. This means that reconstruction is about catering to the wishes of the elderly, said Mr Tricks. He urged that more money be allocated for the elderly to put them in retirement communities and teach them new life skills. Spending in the five-year programme initiated and funded by the central government Reconstruction Agency had been “uncoordinated, ” he said.

Hiroshi Suzuki , chief project manager of the Nuclear Safety Research Division (Reconstruction and Revival Group) at Mitsubishi Research, said one of the future challenges would be treatment of the huge volume of waste collected after decontamination. Some 20m cu m of waste had to go for intermediate processing. Development of technology was needed to separate radioactive cesium released from the plant. As to rehabilitation, even now there was an area near the nuclear plant where people cannot live. He called for measures to encourage local residents to be self-motivating.

Mr Suzuki, who between 1998 and 2002 led the secretariat of the committee of Japanese utilities for the International Maritime Organization and the transport safety standards committee at the International Atomic Energy Agency, has been engaged as a radioactive materials expert since the accident at the power plant. He is helping orchestrate off-site response, including numerous waste reduction projects across Fukushima prefecture. 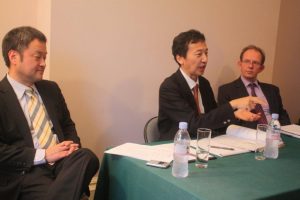 Dr Yuji Genda, professor at the Institute of Social Science at the University of Tokyo, said that the evacuation of many people far from home discouraged them from returning to employment. Despite the general shortage of labour in Japan caused by the ageing of the population, many of the displaced people remained unemployed. “We need to give more thought to this kind of evacuation to unfamiliar areas, ” he said.

Many people of Minamata [where in the 1950s residents suffered organic mercury poisoning caused by consuming fish contaminated by mercury discharged by a chemical factory] had shown sympathy for people forced out by the Fukushima crisis and assisted in their “re-mooring” with communication and continuing dialogue among citizens. Dr Genda spoke of the importance of building trust and said here should be a system of neighbourhood associations.

A member of the audience expressed the view that there had been an impressive pace of disaster recovery, with Fukushima prefecture seeing developments in robotics, welcoming artists and placing emphasis on gastronomy. “There is even a plan to make the prefecture self-sufficient in renewable energy, ” he said.

Mr Tricks said that only half the public housing needed had been achieved, and Jason James, director general of the Daiwa Anglo-Japanese Foundation, added: “There does some to be frustration in the area that things are taking so long. People are fed up with being in temporary accommodation.”

Professor Philip Thomas of Bristol University criticised the decision to evacuate 160, 000 people from their homes, saying that research suggested “that was not necessary for any of them.”