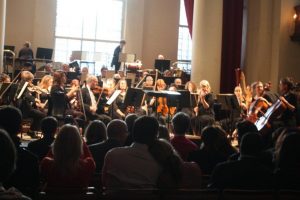 London’s insurance industry is proud to have a fine artistic string to its bow: a fully-fledged symphony orchestra.

Sometimes unsung beyond City boundaries, London Phoenix Orchestra is flourishing, under the wings of the registered charity, the Insurance Orchestral Society.

Whenever it comes out to play – usually five times a year – the orchestra gains new plaudits and supporters. An enthusiastically-supported concert of three classical pieces with an Italian flavour on April 26 2016 in the baroque splendour of St John’s Smith Square was among its latest triumphs. 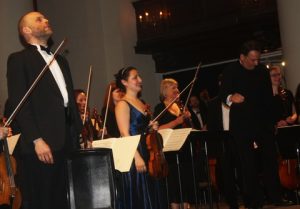 Some of the biggest participants in the insurance market and legal services are in harmony in their support for the venture. The Chartered Insurance Institute, Canopius Group, Talbot, Hardy, Catlin, SCOR, Marketform, Clyde & Co, Aon Benfield, Novae Group, Temple Legal and DUAL International are all corporate members.

Once comprising wholly people from the insurance sector, the orchestra still treasures members from that section of the Square Mile, but most of the musicians are from other walks of life. It has a wealth of reserves – in talent. 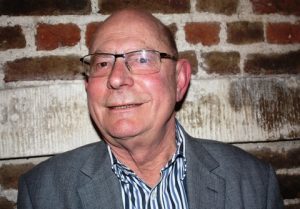 Its leading officers are noted for distinguished careers in insurance, and many of the people who attend the concerts are active in the Lloyd’s and company markets.

Honorary president Reg Brown said: “While the orchestra may have grown and changed over the years, we are proud to retain strong links to the insurance industry and provide its many workers with the chance to further their love of music. This is a unique cultural outlet for amateur musicians working hard in the City. The London Phoenix is probably still the only orchestra within the financial services community.”

As the 50 orchestra members relaxed during the interval at St John’s, Mr Brown observed: “One has to admire the dedication of these musicians. Most have nine-to-five jobs, and they devote their free time to rehearsals to attain remarkably high standards.”

Underwriting syndicates and companies have to monitor carefully their policy back years of variable quality, but the back years of London Phoenix Orchestra are a source of pride. It was founded in 1924 by Harold Rawlinson as the Insurance Orchestra, to give members of the industry the opportunity to meet regularly and enjoy playing music together.

Up to 1939, the orchestra gave concerts in the renowned Queen’s Hall, and in 1951, the then London County Council invited it to appear at the new Royal Festival Hall. For the next 40 years, the Festival Hall and the Queen Elizabeth Hall in the same complex were regular venues. When Harold Rawlinson retired in 1969 it was decided to appoint a professional conductor, the first of whom was Maurice Miles, to raise standards further. 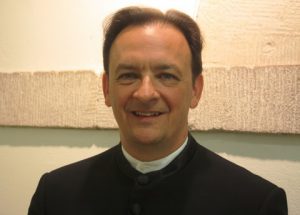 “The fundamental enthusiasm for music and a friendly ethos remain at the heart of the orchestra’s purpose to this day, ” said Alan Grant, chairman of the Insurance Orchestral Society. “Today players are drawn from all backgrounds, not just the insurance industry, and include music students who really value the prospect of a chair in a full-sized orchestra.”

The orchestra turned in a capital performance for their spring appearance at St John’s, with the theme for the evening “Postcard from Italy”. As Mr Brown said, “Under the baton of Levon Parikian, the orchestra is regarded as one of the finest amateur orchestras in London.”

Levon Parikian studied his trade with George Hurst and Ilya Musin, and today is principal conductor and guest conductor for several orchestras, earning praise among others from theSunday Telegraph as a “brilliant young conductor.”

Mr Grant said: “Lev has invested substantial energy and passion in the London Phoenix Orchestra, setting ever-higher standards for us and already increasing the number of performances from three to five concerts each year. He provides us with the vital artistic leadership to guide the Insurance Orchestral Society back to its former glory.”

Among his many commitments, Levon Parikian is principal conductor of the City of Oxford Orchestra and artistic director of the Rehearsal Orchestra, and works with students and youth orchestras. Son of an Armenian father and English mother, he is proud of his heritage – he conducted the UK premiere in 2012 of the opera Anoush (which has been called the national opera of the Armenian people) composed by Armen Tigranian (1879-1950). That performance was by London Armenian Opera, a group of volunteer professionals and students founded in 2011. 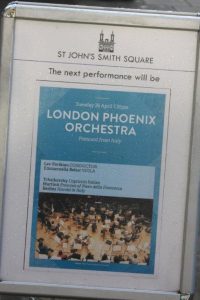 Seemingly effortless charm and freshness of spirit characterised London Phoenix Orchestra’s interpretation at the Westminster venue of music inspired by, but not written by citizens of, Italy. Levon Parikian conveyed brilliantly the mischievous side of Tchaikovsky, who is otherwise noted for bouts of melancholy over his private life, in the roller-coaster Capriccio Italien. Forte andpiano alike were deftly handled.

Next came what may have been the biggest challenge of the evening both on-stage and off: The Frescoes of Piero della Francesca, by Bohuslav Martinů, The Czech composer’s 1955 tone poem was inspired by a visit to the Basilica of San Francesco in Arezzo, where he marvelled at panels of eight scenes depicting the Legend of the True Cross.

Turning to address the gathering before raising his baton, conductor Parikian admitted that it was hard from the point of view of an audience to know how to approach the Martinů (which had its world premiere from the Vienna Philharmonic under Rafael Kubelik in 1956).  “We have to assume that people are hearing this for the very first time, ” he said, and when he asked how many were familiar with the piece, only a few hands were raised.

The sound world of Martinů is somewhat different from what people are used to hearing, he continued, referring to moments of turbulence ahead of the resolution. Martinů is trying to show in music what he experienced when he went into the church and was surrounded by the Renaissance frescoes, of which in dim light he viewed every single surface, but randomly. For Martinů “it is an overwhelming experience, ” said the conductor. He told the audience that the rarely-heard study might be hard to appreciate, but they “should allow it the 15 minutes it takes to play.” 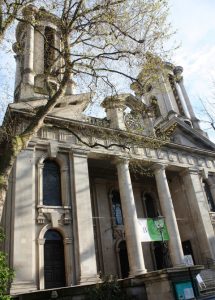 The anguish and the grandeur of The Frescoes stunningly conveyed, the applause confirmed that the listeners had bestowed their best good will upon the experience.  Helpfully, the printed programme reproduced sections of the frescoes – one wonders which other theatres and halls would go to such lengths to illustrate the material in question.

After this display of sensitivity, and after the interval, the orchestra was joined by Emmanuella Reiter (viola) for the dramatic symphony Harold in Italy by Berlioz. The soloist applied vigour to the fiery (although relatively calm by the usual standards of the temperamental French composer) passages of the work which is based on Childe Harold’s Pilgrimage by Byron. Her self-confidence was a perfect match for that of the orchestra.

Emmanuella Reiter is an accomplished performer and tutor: she has performed with most of the London orchestras and is a member of the London Philharmonic. She founded the Jigsaw Players, an ensemble that plays chamber music and jazz and runs educational projects.

As leader of an orchestra whose composition varies slightly from one performance to another, Adrian Garratt is a reliable anchor, and shares with Levon Parikian a sense of humour that keeps the show joyfully on the road. He studied violin with Patricia Calnan and Adrian Eales in Wiltshire and continued his training in London. There, he combined music and his interest in comedy in street performance at Covent Garden tourist market, before forming a comedy string trio with whom he devised original theatre shows with directors including Toby Sedgwick (Warhorse) and Cal McCrystal (One Man Two Guvnors).The shows toured internationally, and he made his West End debut in Swallows and Amazons. He tours his solo show as “manic idiot violinist Sid Bowfin” and continues a long relationship with the Brompton and Harefield Hospitals Arts scheme.

Orchestra president Reg Brown started his insurance career with Reliance Fire & Accident and became London branch manager of FAI Insurance Group. He moved to Lloyd’s, joining Frank Barber & Others as a specialist liability underwriter, and eventually became underwriter of syndicate 702 and a director of Octavian Syndicate Management (a Terra Nova Group company) and its successor Markel Syndicate Management, and of Pool Re.

He is a past president of the British Insurance Law Association, a former director of Kiln plc, Kiln Underwriting, PRI Group, Professional Risks Insurance, MCIS, C J Coleman & Co and the Financial Services National Training Organisation. He is a Freeman of the City of London and a member of the Worshipful Company of Insurers.

Alan Grant began his career in the London insurance market with Halford Shead & Partners, moving to EF Williams Syndicate before leaving for the company market where he was underwriting director for specialty lines at CNA Reinsurance. After returning to Lloyd’s to form his own syndicate, he joined Converium (now SCOR Group) where he established a Financial Services Authority-regulated insurance company and a Lloyd’s corporate member, at both of which he was chief executive and chief underwriting officer for specialty lines.

Mr Grant has served on several London market committees and is now a consultant and non-executive director of various insurance and private equity enterprises.

The Insurance Orchestral Society has a small number of honorary life members, “selected for their immeasurable contribution to the orchestra over the years.” They are Allan Cook, Nigel Dant, Marcia Lingwood, Eileen McManus, Philip White and John Killer.

Friends can subscribe as individual members, and corporate membership comes in three categories, with the brands Overture, Concerto and Symphony. Mr Brown said: “As the orchestra of the insurance industry, the London Phoenix Orchestra is always looking to build new relationships with companies operating in this sector.”

London Phoenix Orchestra continues to invite for audition new players of at least Grade 8 examination standard and who have appropriate experience. At present the need is mainly for string players, especially of viola and double bass.

Next public event will be on Thursday June 23 2016 at Cadogan Hall: a summer gala concert on the theme “film night” in support of The Insurance Charities.  That is referendum day in the UK, so the message is: cast your vote for… this splendid orchestra.