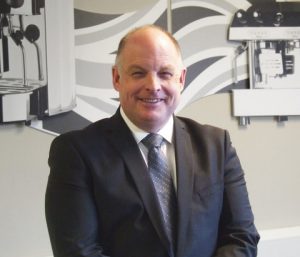 Birmingham coffee machine manufacturer Fracino has boosted its team by a further 25% with a series of appointments, including former distributor Peter Atmore who has come on board as head of sales and marketing.

Peter Atmore brings over three decades of sector experience to his role at the 3rd generation family business, which exports to over 70 countries and manufacturers over 5, 000 machines annually for customers including SUBWAY®, Patisserie Valerie, Druckers coffee shops and Pathfinder pub chains.
His powerful track record includes almost a quarter of a century as MD of MCS Coffee on Merseyside which supplied Fracino machines, as well as sales director at Coffee 1652, North West Vending and 1 Cup.
The ten new appointments further enhancing the expertise of the 60-strong team span research and development, service and stock control.

The developments come at a formative time for Fracino – the first manufacturer commissioned by SUBWAY® purchasing group, EIPC, to produce bespoke machines for its franchisees.

Investment and innovation is the lifeblood of the business which has injected £4m into new equipment and premises in recent years, produced 13 new machines since 2008, and scooped 15 awards since 2013 – the latest being the EEF’s silver Smart Product award for the SUB1 machines which have been installed in 400  SUBWAY® stories across England, Ireland and Poland.

Peter said “This is a fantastic time to be joining Fracino whose international reputation for manufacturing, exporting and product innovation continues to rocket. I’ve worked with Adrian and the team for many years and often joke that if you cut me, I bleed Fracino!”

Adrian Maxwell, Fracino MD, commented: “Peter’s depth and breadth of expertise is instrumental to our vision for exports to make up 50% of our turnover by 2018. He is admired and highly respected within our industry and boasts a track record which is second to none.”

Celebrating its 50th anniversary in 2013, the family owned and run business is home to three generations of the Maxwell family. Founder Frank is the company’s chairman; his son Adrian is the MD, Adrian’s wife Marion is accounts director and their daughter Rebecca works as a service engineer. Their brother David also works in the business in his university breaks.

•       The multi award-winning manufacturer was formed in 1963, when Birmingham engineer Frank Maxwell began making coffee machines in his garden shed.
•       Fracino is the UK’s sole manufacturer of cappuccino and espresso machines – a market traditionally dominated by Italian and Spanish manufacturers.
•       The 50-strong team sells over 5, 000 machines every year to customers including  SUBWAY®, Patisserie Valerie, Druckers coffee shops and Pathfinder pub chains.
•       Despite the recession, Fracino has achieved double digit sales growth year-on-year since 2009.
•       The company’s portfolio includes 55 products. Fracino manufacture a range of coffee machines including the bean-to-cup Cybercino machine, hand fill machines and a range of traditional machines including the stylish Romano and the new PID (Proportional Integral Derivative).
•       Fracino’s portfolio also extends to dishwashers, glass washers, ice machines and water boilers.

RGChallenge is back: Accelerate & Fund your startup in 5 days