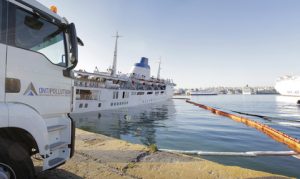 A view of the listed “Panagia Tinou” with protecting booms

Antipollution SA provided marine environmental protection services during operations of Hellenic Tugs for the salvage in the port of Piraeus of the passenger ferry Panagia Tinou.

The ferry, moored in port, had on April 26 2016 taken on water and suffered a severe list.

Piraeus Port Authority awarded the contract exclusively to Hellenic Tugs, the biggest salvage and towage joint venture in Greece and whose members are Vernicos, Karapiperis, Lyboussakis and Megatugs.

Antipollution said that the experience, skilled personnel, equipment and state of the art shipping means it employs were immediately mobilised for prompt response to any potential pollution during salvage operations for the 1972-built ferry – which was built to serve the Greek islands – and to protect the sea area of Piraeus Port.