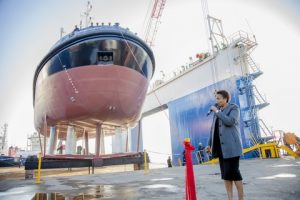 The two tugs – named QUNU and CORMORANT – form part of TNPA’s R1.4 billion contract awarded to Durban ship builder, Southern African Shipyards. It is the largest single contract TNPA has ever given to a South African company for the building of harbour craft and will see a total of nine new tugs built for the South African port landlord over three and a half years.

In line with maritime tradition, the duty of officially naming the vessels was carried out by a Lady Sponsor, Linda Mabaso, Chair of Transnet SOC Limited.

Ms Mabaso said the tug building contract was a concrete demonstration of the local ship building expertise that Operation Phakisa aimed to leverage as part of its focus on the Oceans Economy.

“Operation Phakisa is reigniting growth in the ocean economy and has been a catalyst for Transnet’s fast-tracking of investments into our ports. South Africa’s location and the expertise demonstrated by projects like this are key to us increasing our share of the global marine manufacturing market, including ship-building and repair, rig repair and refurbishment or boat-building, ” she said.

Karl Wiesner, Chief Commercial Operations Officer of Southern African Shipyards, added: “The continued excellence of the Southern African Shipyards steel fabrication and production team to deliver under this programme, resulting today in the launch of the second and third tugs,  demonstrates the commitment of both the shipyard and TNPA to showcase the maritime industrial expertise in South Africa, and to become a key national asset able to compete in the global shipbuilding industry.” 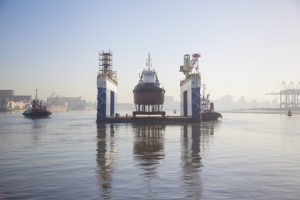 Another view from the naming ceremony

Dr Donald Mkhawanazi, Chairman of Southern African Shipyards highlighted that the project has, since inception, created at least 500 direct and 3500 indirect jobs. “The commitment of employees continues to ensure the delivery of quality tugs, on budget and on time, ” he said.

Ms Mabaso named the two tugs ‘QUNU’ – in reference to the Eastern Cape home village of former President, the late Nelson Mandela – and ‘CORMORANT’ after the aquatic bird species of the same name.

Tug QUNU will be allocated to the Port of Port Elizabeth alongside her sister tug MVEZO, which was the first to roll off the production line recently. QUNU is expected to be handed over in June, while CORMORANT is destined for the Port of Saldanha in July.

The large-scale project will see two tugs each allocated to the Ports of Durban, Richards Bay and Port Elizabeth, while Saldanha, which handles the largest carriers, would receive three tugs. There will be handovers every three months until the last tug is launched in early 2018.

TNPA’s new fleet of nine tugs are each 31 metres long with a 70 ton bollard pull. The older fleet of 29 tugs has 32.5 to 40 ton pulls. The increased bollard pull of these new generation tugs meets international standards and they also feature the latest global technology. The tugs have Voith Scheider propulsion which makes them highly manoeuvrable and able to change the direction and thrust almost instantaneously while guiding large vessels safely into South Africa’s ports, according to TNPA programme manager Eugene Rappetti, Senior Manager for Marine Operations.