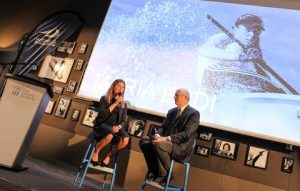 World Sailing, the international governing body of the sport, celebrated the success of all sailors with an evening reception at the Olympic Museum in Lausanne, Switzerland on Saturday 7 May.

World Sailing’s Mid-Year Meetings are currently ongoing in Lausanne, the home of the International Olympic Committee, and senior officials took some time out to reflect on the last 12 months, commending the work of those on their sailing journey at the iconic Olympic Museum.

Hungary’s Maria Erdi is the personification of the pathway working in full effect. Starting out in Optimists, moving into the Laser 4.7, Erdi sailed the Byte CII at 2014 Youth Olympic Games in Nanjing.

Erdi participated in the European ENP clinic in her home town of Balatonfured where she received expert coaching from World Sailing’s Nominated Experts. World Sailing followed Erdi during the clinic to gain an insight into her life.  Watch the video back below:
URL – https://youtu.be/1dNZE6ZfzHQ
Embed – <iframe width=”560″ height=”315″ src=”https://www.youtube.com/embed/1dNZE6ZfzHQ” frameborder=”0″ allowfullscreen></iframe>

At the end of 2015, the 18-year-old sailed at the Youth Sailing World Championships in Langkawi, Malaysia and claimed the Laser Radial gold medal in style. She made great strides in the senior circuit and at the Trofeo Princesa Sofia she qualified to represent her nation at the Rio 2016 Olympic Games.

Taking time out from a busy Olympic preparation schedule, and fresh from finishing 13th at Sailing World Cup Hyères, Erdi joined the evening in Lausanne. Speaking with World Sailing Vice-President, Gary Jobson, Erdi said, “When I started, I didn’t really know who the best sailors in the world were but I saw the Hungarian sailors doing really well at an international level and I wanted to do the same. I started racing in Hungarian regattas, then I went abroad and now I’m going to the Olympics. I just really love this sport.”

Erdi has turned heads with her impressive performances. She took an eighth in a hugely experienced fleet at Trofeo Princesa Sofia to qualify for Rio 2016 and followed it up with a 13th in Hyères which turned the heads of the leading lights of the Radial fleet.

“It’s very good that I can race with the best and I’m always trying to learn from them, ” explained Erdi. “If I am in front of them in a race it’s quite a lot of pressure and I do not want to lose. If I then beat them in a race I can say I beat an Olympic champion.

“None of the senior sailors really spoke to me before I qualified for the Olympics. I had a really good regatta in Palma, it was the last qualification regatta. Some of them came up to me and congratulated me on a really good week. They’re talking to me now, ” she said through a smile.

Erdi’s pathway shares similarities to Austria’s Lara Vadlau. The Austrian went to the 2010 Youth Olympic Games, won Youth Worlds gold the following year and qualified for the London 2012 Olympic Games at 18-years-old. Now 22 and with experience under her belt, Vadlau holds two World Championship titles in the 470 and is considered a favourite for Rio 2016 gold.

Like Vadlau, Erdi remains focused and modest and has her eyes set on achieving the ultimate in sailing, an Olympic gold medal but knows it’s not going to be easy. Concluding her conversation with Jobson she said, “The most important thing in sailing is to never lose focus. In youth sailing you can allow yourself some mistakes and still end up in the top three in a race. In the senior fleet you make one mistake and you lose 20 places. It’s all about focus and putting in hours off of the water.”

World Sailing continue to support the emerging nations and ENP clinics have been held in Uruguay and the Netherlands so far in 2016. Further clinics, helping both sailors and coaches, follow in South Africa, Singapore and then New Zealand before the 2016 Youth Sailing World Championships in Auckland from 14-20 December.

At the reception in Lausanne, World Sailing VP Gary Jobson also presented the Paralympic Development Program (PDP). The PDP ensured the 2015 Para World Sailing Championships was the most successful in history. A record 32 nations and 140 sailors raced across the three Paralympic events and the PDP helped to provide guidance, coaching and funding to sailors.

Surrounded by great moments in Olympic history it was apt for the evening to end on an Olympic, Paralympic Games focus. Vice President Gary Jobson gave guests a brief insight into what sort of spectacle the Games will be. Enjoy the video preview here –https://www.facebook.com/ISAFWorldSailing/videos/10154291877285757/