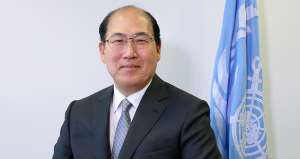 The IMO Secretary-General, Kitack Lim, will give the IMarEST’s 5th Annual Founders’ Lecture on the 14h June 2016 at One Great George Street, London. The lecture is sponsored by IMarEST Marine Partner, ClassNK, a not-for-profit classification society dedicated to ensuring safety at sea, and helping to protect the marine environment.

“We are delighted to welcome IMO Secretary-General Mr. Kitack Lim to this year’s Founders’ Lecture. In order to overcome the unprecedented challenges that we are currently facing in the maritime industry, it is imperative that we unite to exchange ideas and insight. The Founders’ Lecture provides that necessary platform through which stakeholders can gather and do this. Mr. Lim’s wisdom, gained through his extensive industry experience, is invaluable and we all look forward to learning more about his vision in June.” Noboru Ueda, Chairman and President of ClassNK.

The lecture is free to attend and will be held at One Great George Street, Westminster, SW1P 3AA. Refreshments will be served from 18:00 and the lecture will begin at 18:30. A drinks reception will follow at 19:30.

Bev Mackenzie, IMarEST Technical Director commented “In the short time in which he has been Secretary-General, Mr Lim has made some inspiring and thought-provoking speeches to the IMO Committees and Sub-Committees. He has highlighted many of the issues that align perfectly with the IMarEST mission and vision and we are absolutely thrilled that he will do us the honour of delivering the 5th Founders’ Lecture”.

Please email events@imarest.org to register for your free place.

Mr. Lim was born in Masan, Gyeongsangnam-do, one of the major port cities in the Republic of Korea. He majored in nautical science at the Korea Maritime and Ocean University (KMOU), Busan, graduating in 1977. He worked on ships as a Korean naval officer and for Sanko Shipping Co. He joined the Korea Maritime and Port Administration in 1985, while continuing with further studies at the Graduate School of Administration, Yonsei University, obtaining a Master’s Degree in 1990.  He then studied maritime administration with a major in navigation at the World Maritime University (WMU), graduating with a master’s degree. From 1995 he attended a doctoral programme for international law at KMOU, completing course work in 1998.

Mr. Lim began attending IMO meetings as part of the Republic of Korea’s delegation in 1986, actively participating in maritime safety and environmental protection issues.  From 1992, he engaged in activities to promote maritime safety through effective implementation of IMO conventions in his country and other IMO Member States in the Asian region. He was elected Chairman of the Tokyo Memorandum on Port State Control in 2004.

Mr Lim was then appointed as Director General for Maritime Safety Policy Bureau at the Headquarters of the Ministry of Land, Transport and Maritime Affairs (MLTM). He led the delegation of the Republic of Korea to the IMO Assembly in 2009.

In March 2011, Mr. Lim was appointed Commissioner of the Korean Maritime Safety Tribunal (KMST).  In July 2012, he assumed the position of President of Busan Port Authority.

IMarEST’s Salvage past, present and future: Lessons learned and challenges ahead