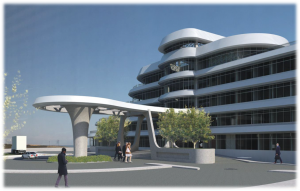 Artist’s impressions of the new R255 million Port of Ngqura administration building scheduled for completion by the end of this year.

[PORT ELIZABETH, South Africa, 11 May 2016]  Two new landmarks at the Port of Ngqura, which are part of ongoing developments to position the port as a container transhipment hub for Sub-Saharan Africa, were officially launched by Transnet National Ports Authority (TNPA) today.

The new landmarks are the port’s state-of-the-art administration building and an administration craft basin for pilot boats and tugboats, including office facilities for operational staff working on these craft.

Also included in TNPA’s latest R700 million investment into the port is the vacuum based automated mooring technology pioneered at Ngqura last year. Produced by global engineering group, Cavotec, the 26 mooring units were designed, custom manufactured and installed to meet the specific environmental conditions of the Port of Ngqura, which include strong winds that can negatively impact on cargo operations, safety and the port’s efficiency.

TNPA Chief Executive, Richard Vallihu, said: “These three major operational projects form part of Transnet’s Market Demand Strategy which is now in its fourth year of implementation and which aims to enable the effective, efficient and economic functioning of an integrated port system to promote economic growth.”

“Under the Transnet MDS TNPA will invest R56 billion over the next 10 years across South Africa’s ports. These three projects at the Port of Ngqura represent an investment of R700 million, ” he added.

Ngqura Port Manager, Mpumi Dweba, said:  “Such endeavours support the tremendous growth of the Port of Ngqura and match its profile as a world-class container hub, which is encouraging significant investment in the region. They are designed to improve port efficiency at our port and are boosting the economy of the Eastern Cape in the short term by creating additional jobs.”

Dweba added: “Specifically during the construction phase of the admin building and admin craft basin we have so far created 154 jobs at a cost of over R18 million – all of which goes into the Eastern Cape economy. Forty eight of these jobs have been created for Black youth, while 285 Eastern Cape employees are also benefiting from skills development programmes associated with these projects.

“In addition, 16 small businesses in the Eastern Cape have been engaged to provide materials, equipment and services at a cost of R4.36 million – a further injection into the local economy.

She said that in the longer term these projects would help ensure the ongoing success of the province, the country and the region by supporting the Port of Ngqura to flourish as the major transhipment hub for sub-Saharan Africa and an important link connecting trade between South America and Asia.

A highlight of the launch was the hand-over of 10 computers to Soweto-on-Sea Primary School, donated by Cavotec as part of their corporate social investment contribution under the mooring system contract.  The donation, which included installation and networking, will enable learners to access the Internet and gain insight into Transnet and TNPA’s business as well as future opportunities in the maritime industry.

Construction of the R255 million administration building, which will be one of the premier ‘green’ buildings in the Nelson Mandela Bay Metropolitan Municipality, is well underway with completion targeted for the end of this year. TNPA is pursuing a 4-Star Green Star SA rating from the Green Building Council of South Africa (GBCSA) for the building, which comprises a state-of-the-art five-storey building with a basement level and external parking areas.

With capacity to house 205 staff it will cater for Ngqura’s growing human resources as the port continues to create jobs within the region to support its ongoing expansion.

To date Ngqura has operated without an administration craft basin for the docking of marine craft such as pilot boats and tugboats, as well as various vessels belonging to SAPS and SANPARKS.

The new R362 million administration craft basin located at the root of the eastern breakwater in the port basin will facilitate this process safely in line with Ngqura’s growing fleet of craft.

Construction of the administration craft basin is planned for completion at the end of the year. Dredging is well underway and marine construction has commenced.

The design of the craft basin ensures that the wave climate and wave resonance within the basin remain within specified limits.

The tender evaluation process for the administration craft building began on 18 April 2016 and this building is planned for completion mid-2017.

These developments are part of Transnet National Ports Authority’s capacity installation programme intended to increase the handling capacity of this flagship port, as well as other port activities in future for South Africa.

All Ngqura projects are subject to lengthy environmental assessment, design and tender stages to ensure that they comply with the strict conditions governing Ngqura’s operations in this environmentally sensitive area. TNPA controls and administers the port on behalf of the State.

Dinosaur cranes and women in boots. The Port of Immingham: A child’s eye-view