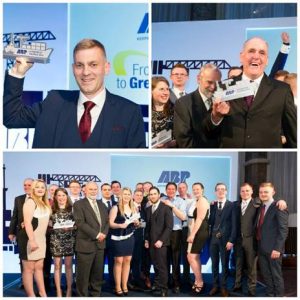 Humber apprentices were the stars of the show recently when ABP hosted its very first Apprentice Awards.

The Awards featured 10 categories ranging from Longest Serving Apprentice, to Best Business Contribution by an ABP Apprentice and Apprentice’s Apprentice. Six of the ten awards were taken by ABP staff working on the Humber.

Kurt Jensen, a Marine Operations Apprentice based in Immingham was named Apprentice of the Year (2014).

He said: “Winning the award was a very proud moment for me and real high point in my career so far.

“I’ve learnt a great deal during my time with ABP and really enjoyed the challenges it’s presented me with and the variety the role offers. I’m looking forward to the future – to developing my skills and progressing within the company.”

Steve Archer of East Hull has worked for ABP for 51 years after starting as an apprentice carpenter with the British Transport Docks Board in 1960 at the age of 15. Steve retired on the 4th May and received the award for the Longest Serving Former Apprentice at the event.

He said: “It’s been a very good company to work for and I’ll miss the camaraderie but it doesn’t seem real, ” said Steve. “Looking back and thinking that I’ve spent over half a century working for ABP when it’s gone so quickly is just incredible.

“The business has changed and I’ve learned new skills along the way, from crane driving to using forklifts – it’s been quite an experience. I would urge anyone to consider working for ABP. I’ve had a great time and it’s good to see my long service recognised and to share this celebration with some of the young people coming up too.”

ABP CEO, James Cooper said: “ABP is committed to developing talent and I am delighted to be celebrating the contribution of our apprentices and graduate trainees.

“We currently have 62 apprentices employed across the business and this is a number we are working to increase year by year.”

“Congratulations to all of our apprentices. They are our future managers and leaders who, I am sure, will be running ABP and taking it from strength to strength in the future.”

ABP Apprentices and Graduates who took awards are as follows: