The Paradise of Jiangnan Water… 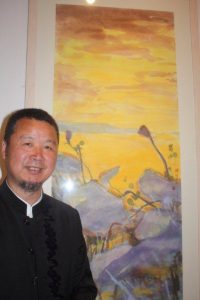 The Paradise of Jiangnan Water: watercolour paintings by Chen Lixun win praise on his London debut

What more appropriate medium in which to depict water than watercolour? It has been unusual, though, for this technique to be applied by China’s artists in their illustrations of the rivers threading their way through their country’s mountain ranges, and of its mighty waterfalls.

Despite a marvellous artistic history, China came late to European-style watercolour painting. From a thousand years ago onwards there was what was called watercolour painting, but that was based on inks. It is only just over a century ago when the Chinese began to shown mastery in adapting smoothly their heritage to the modern technique – which was indeed in comfortable sympathy with the ink system.

As proof of this success, a foremost contemporary watercolour exponent has just been attracting huge admiration for his four-day mid-May exhibition in London.

As the show extolled the beauty of pleasing landscape, its venue was fitting: the premises of the Royal College of Art is directly opposite one of London’s signature green spaces, Kensington Gardens.  The artist was Chen Lixun, an associate professor at China Academy of Arts University and a member of the Chinese Watercolour Association. He excels in the pure watercolour medium, imparting his feeling for the detail and atmosphere of water landscapes, their foliage, and for the compelling patterns stamped by weather and by natural light.

In his collection The Paradise of Jiangnan Water, the subject matter is the water towns and villages, lakes, streams and gardens of eastern China – their physicality, but more potently the intimate mood that they exude. Chen Lixun follows in the national tradition of the painter contemplating a scene as much in the role of philosopher as of one who merely records it. A mantle of subtlety and serenity is woven around much of the work.

For his first exhibition in London, he brought 30 handsomely-sized framed works on paper, all devoted to the Jiangnan region which conveys the meaning “south of the Yangtze River.”

Extending over parts of Anhui, Jiangsu, Jiangxi and Zhejiang provinces and Shanghai, the region hosts waterways with an eventful history spanning thousands of years and that were once transport lifelines for communities. The architectural lustre of some of the old towns they served was wiped out during the Cultural Revolution, and modern development swamped all the charm of others, but several remain in characterful shape and are tourist attractions. Enough of this “paradise of Jiangnan water” survives to be celebrated by poets and painters. 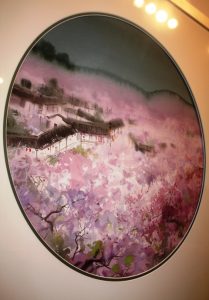 Diane Shiach, who curated the London show, wrote in the catalogue: “The West has always had a fascination with Chinese traditional ink paintings.  Cheng Lixun’s chance encounter with Western watercolour painting held an equal fascination for the artist.”

He has achieved distinctive results, though, and, as Ms Shiach said: “We experience a synthesis of Western watercolour technique and Eastern poetic style.”

Some of his works (the Lotus West Lake series) are reminiscent of Chinese scroll paintings, some (Jiangnan Garden, Water Village) impart an abstract expressionist aura, others (Rising Scent,  Rosy Cloud, Lake and Dreams) use blocks of colour to achieve their impact. In all instances, he demonstrates his ability to handle watercolours – one of the most unforgiving mediums – with sureness of touch, spontaneity and versatility. He has a clear affinity with this nexus of lakes and lotuses.

In her catalogue commentary, Ms Shiach wrote: “The juxtaposition of bold colour, light and shape combined with a free-flowing expression of brushwork gives us a more direct and contemporary vision of this unique landscape.”

Works by Chen Lixun are to be seen in several important art galleries in China, and in private collections internationally, and he has for just over 20 years exhibited widely in Beijing, Hangzhou, Shanghai, Hong Kong and Malaysia. In 2009 he travelled in 14 European countries on a scholarship from the China Academy of Arts University, and in 2010 studied in the UK.

In his earlier days, he studied under Jian Xu, a leading Chinese water colourist.  Now he is active in bodies such as the Watercolour Research Society of Jiangsu province. 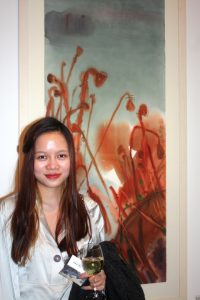 Guest at the private view, and Lotus West Lake II.

The president of China Academy of Art (founded in 1928 and which has “a mission to revitalise Chinese art” and “a poetic tradition linked with the hills and waters”) is quoted as saying: “The grounding and inspiration of Eastern and Western traditional watercolour have inspired Chen Lixun to find his own voice and unique take on this fascinating landscape. He has experimented with colour, shape, shade and light to develop his own style and view of the legendary landscape of Jiangnan.”