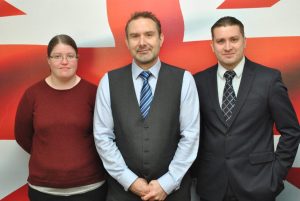 It takes dedication to sustain commitment to a company and its customers over the course of a decade, but two employees at OrderWise have been congratulated after achieving exactly that.

Development Manager Steve Ridgley and Software Developer Jenny Hilton are the latest people to have joined an elite group of OrderWise employees who have worked for the company for 10 years.

The pair have witnessed and been partly responsible for the substantial growth of OrderWise, helping to maintain its status as one of the UK and Ireland’s leading suppliers of business software management.

A major part of their work over the last ten years has included supporting the introduction of the firm’s comprehensive development schedule, as well as catering to customers’ often demanding and specialised needs.

Jenny originally joined OrderWise as a web developer to work on scripting but has since moved into working on core software development.

She said: “It’s a great place to work and we’ve come such a long way. To see where OrderWise is now, ten years on, is mind-blowing. I’m so proud of the amount of people that work on and use our software daily.”

Meanwhile, Steve spent his first six months at OrderWise as a reports writer before moving onto development.

Over time his role has evolved, meaning he is now Development Manager at the Saxilby-based firm and is heavily involved in the planning and scheduling of the releases of the software, with a new version of OrderWise released every single month.

Steve said: “I am most proud of the work Jenny and I have done together on the current incarnation of OrderWise, which is the basis for everything we do now. The fact that we initiated this particular version and that it’s grown so much is, for me, a huge achievement.”

As a token of the company’s gratitude for their contribution to OrderWise, Steve and Jenny were commended and received special anniversary gifts during individual presentations by Managing Director David Hallam.

David said: “Both Steve and Jenny received a well-deserved round of applause from the whole of the development team following their presentations.

“Their hard work and dedication, along with the rest of the team, have been the driving forces behind OrderWise becoming the extensive all-in-one business management solution it is today.

“We are extremely grateful for Steve and Jenny’s unwavering commitment to OrderWise over the last decade.”

•    OrderWise Business Management Software from Wise Software (UK) Ltd is a fully scalable, fully integrated and fully tailored all-in-one solution, designed to suit any business, of any size and of any sector. It can bring together all strands of a business and be adapted for use across the web in order to manage stock, orders and warehousing operations, as well as sync with accounts software and other systems to provide a combined solution.
•    Based in Saxilby just outside of Lincoln, the company has been established since 1991.

Daily Wealth Letter from The Wealth Forums 18 May 2016