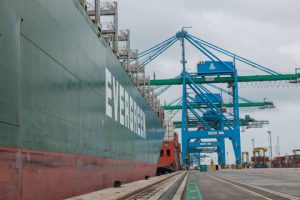 The “Ever Living” berthed in Fos’ container terminal

Taiwanese container line Evergreen has resumed direct calls at Marseille Fos for the first time in 11 years, replacing a slot arrangement within the CKYHE alliance by adding its own ships to those of Cosco, K Line, Yang Ming and Hanjin calling at Fos on the Asia/Mediterranean/northern Europe rotation.

Evergreen’s first Fos call under the service – which operates from the Seayard terminal at the French port’s Fos 2XL facility – was made by the 8, 508 teu Ever Living.  During a special ceremony, Evergreen France chairman James Tang announced that from next year the company plans to replace such ships with 14, 000 teu vessels in a move aimed at doubling its current Fos throughput.

Mr Tang described the new commitment as a mark of confidence in the port, explaining: “Evergreen never completely left Marseille.  We retained our office and, following the 2011 French port reforms, we reached the slot agreement with CKYH, allowing us to maintain market share at Fos.  Now, by positioning our own ships within the alliance, we have given ourselves the  target of doubling our traffic. 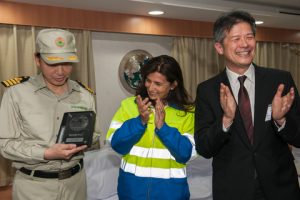 “Taking account of the congestion that we observe in north European ports, we join the strategic vision of Marseille Fos in positioning itself as a southern alternative to serve French and European markets.”

Marseille Fos CEO Christine Cabau Woehrel presented a commemorative plaque to Ever Livingmaster Capt. Yang Yun-Sin at the gathering, which was attended by customers and port authority representatives.