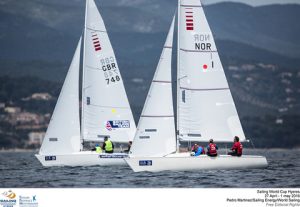 The 2016 Para World Sailing Championships will see sailors from over 20 nations competing in the three Paralympic classes out of the International Sailing Centre Medemblik, Netherlands from 24 May to 28 May.

In the last big hit out before the Rio 2016 Paralympic Sailing Competition in September a host of Paralympic medallists, world champions and Sailing World Cup winners make up the start list across the 2.4 Norlin OD, SKUD18 and Sonar fleets.

Heading in to the last Paralympics in London 2012 as Sonar world champions were Norway’s Aleksander Wang-Hansen, Marie Solberg and Per Kristiansen. A bit of history repeating would be welcomed by the team as we head toward the next Paralympics of Rio 2016 in September.

Despite being world champions the Norwegian team returned with a bronze medal from London 2012. They also finished with another third place in the 2015 Para World Sailing Championship, but they come in to this regatta with a lot of confidence following their gold at the Sailing World Cup Hyères in April this year, maybe signaling a change of fortunes as they look ahead to try and upgrade that Paralympic bronze.

Their current confidence comes from taking the Sailing World Cup win in France, despite a less than perfect competition start, over the 2015 world champions, Great Britain’s John Robertson, Hannah Stodel and Steve Thomas. The British team however will be hoping to rectify the situation and retain the title they won in Melbourne, Australia and get some momentum back in their favour.

If you are the type of person who likes to look at numbers and sequences, then look no further than Australia’s Colin Harrison, Jonathan Harris and Russell Boaden. The Australian team took third in the 2014 Para Worlds and second in the 2015 Para Worlds. We all know what is next in that series of results. Sailing at the 2016 Para Worlds in the same waters where they won the last Delta Lloyd Regatta in 2015 adds some more weight to the theory.

The Australian’s beat a Delta Lloyd fleet which included then current world champions, France’s Bruno Jourdren, Eric Flageul and Nicolas Vimont-Vicary. The French team will want to recapture the form which gave them two world titles in a row in 2013 and 2014.

Helmed by one of the most successful Paralympic sailors at the Medemblik regatta, Canada will be looking for Paul Tingley to lead Logan Campbell and Scott Lutes to a medal after they slipped to fifth overall in 2015. The Canadian’s won silver at the 2014 Para Worlds with the Sydney 2000 bronze medallist Tingley at the helm.

With teams from Brazil, Greece, Ireland, Israel, Italy and Spain there are plenty of medal prospects in the Sonar fleet and with a host of titles and medals in the line-up it could be a very tough one to call.

Racing in the Sonar is scheduled to commence at 13.30 on Tuesday 24 May.