Polish lessons for all in the Para Worlds SKUD18 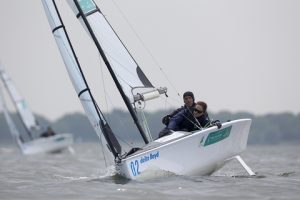 On day three of the 2016 Para World Sailing Championships the top of the leader boards tightened up as the discards came in to play in Medemblik, the Netherlands.

Light winds kept the fleets ashore as postponements delayed racing across the three Paralympic classes, but when racing began and the discards were applied small splinter groups seemed to pull away at the top of each fleet, with one team in particular even impressing some current world champions.

The team that seem to have peaked at the right time and maintain their position at the top of the SKUD18 fleet are Poland’s Monika Gibes and Piotr Cichocki who yet again had a solid day on the water. The pair scored a third in the first race of the day and a fourth in the second which they now discard. Discarding a fourth goes to show how well the Polish team have been doing in Medemblik in what is a tight, competitive field.

With Gibes and Cichocki on 10 points, following behind is a group of six teams bunched together with only three points separating second to seventh.

Currently in second position are Daniel Fitzgibbon and Liesl Tesch (AUS). The regatta hasn’t gone quite as the current world champions would have planned, but being the seasoned professional that Tesch is she knows that lessons can be learned from every experience, “We had a much better day on the water today, thank goodness. We dug deep and its quite exciting to come back after a few disasters. We learn a lot when we lose and we have a lot to improve on when we win.”

An effervescent Tesch even got excited thinking about how close the competition is becoming, “It’s good to see how tight the fleet is getting. The start is getting messy out there which is great and very challenging.”

On shore you can see the camaraderie between the sailors and Tesch is more than happy to compliment a rival, even if they could be taking their world championship title from her if they continue in this rich vein of form, “I love the Polish guys [Gibes and Cichocki]. They are really great guys and really good sailors. At the moment they are teaching the SKUD fleet how we should be sailing.”

It would seem that nothing can get this Aussie down, the thrill of competition even spilling over in to the national battle for selection she has with counterparts Amethyst Barnbrook and Brett Pearce, “It’s amazingly exciting. We are so close and even the finish today we only managed to beat them by a spinnaker pole. It is definitely getting exciting for selection.”

Fitzgibbon and Tesch took a bullet and second place today to sit in second overall with their rivals Barnbrook and Brett taking a third and fourth to hold sixth. Both teams are still in the mix for a medal and the national selection could go right down to the wire.

Despite an eighth and a discarded 11, Great Britain’s Alexandra Rickham and Niki Birrell are in third on 19 points, tied with John McRoberts and Jackie Gay (CAN) who scored a 2, 6.

It’s also tight at the top of the 2.4 Norlin OD with Heiko Kroeger (GER) and Matt Bugg (AUS) on 17 points and current world champion Damien Seguin (FRA) in third on 18.

Despite leading the fleet, it was another up and down day for Kroeger as he scored a second and tenth place, a place he has to count due to an earlier 20th place finish. The German believes that the tricky wind on the Ijsselmeer just hasn’t been playing fair with him and the rest of the fleet over the past few days, “It’s tough to sail here. You don’t see the wind shifts or when it’s coming, and that is a problem.”

Kroeger did get in the good graces of the wind gods in race one of the day and also the beginning of the second, but that’s where his luck stopped, “The first race was good today. I got a second. I was fast and a little bit clever. In the second race I had a brilliant start and at the pin end I was leading with Helena Lucas (GBR). She tacked away about 20 seconds earlier than me and that was it. She was leading and I got caught out and about eight boats got me.”

As Kroeger said, Great Britain’s Helena Lucas tacked at the right time and got a bullet in the first race, add a third place to that and it made for a really good day for the British sailor.

Giving her thoughts on the battle at the top, Lucas said, “I think it’s been completely thrown wide open. Certainly for the first three. Matt’s been really consistent, Damien’s had his first big score on the board, Heiko had a great first race but not so great in the second.”

There may be three out in front at the moment, but not for much longer if Lucas gets her way, “The door’s wide open but hopefully I’m chipping my way back in and hopefully by the end of the week I’ll have reappeared in the top three without anyone realising.”

Sitting in fourth on 23 points, Lucas is definitely in position to sneak up the leader board and one thing she had in the day’s races will get her where she wants to be, “Speed was the massive one today. I had really good speed. That obviously massively helped because it sort of seemed a bit of a one way track so it was more of a speed race and if you had good pace it could get you out of a lot of trouble.”

With Lucas taking one of the bullets on offer, the second went to USA’s Dee Smith which helped him move up the leader board to sit in sixth. The American had some damage to his boat on day one of the championships so a bullet will be a welcome relief and show that he is back in the mix.

It was a long wait for the Sonar fleet before they could get out on the water to do some racing due to the postponements in the other fleets, but they stayed on schedule with another two races in the bag.

The first race was won by Norway’s Aleksander Wang-Hansen, Marie Solberg and Per Kristiansen. The team followed that up with a fifth in the second race to leave them in fourth on the leader board with 18 points.

Just above the Norwegian’s in third place are the German team of Lasse Klotzing, Jens Kroker and Siegmund Mainka who are still getting to grips with a new team dynamic.

Despite the team being relatively new, the German’s scored a 2, 4 for the day, which pleased former helm turned trimmer Kroker, “Our day went excellently well up until the last downwind beat where we were leading the pack and then lost three boats on the downwind due to a wind pressure system we just couldn’t reach. But I think our strategy and tactics today were excellent and as a new team we are very, very happy.”

Stepping in to the Sonar from the 2.4 Norlin OD, Klotzing took over helm duty from Kroker and hasn’t had a great deal of time in the boat, but Kroker doesn’t think the lack of time is an issue, “We have Lasse now at the helm who brings a lot of experience and I think we are probably better as a unit now with everyone’s collective experience contributing to the team.”

There could be only one question for helm Klotzing, and thinking about it, only one answer which he gives with a laugh, “The most difficult part is the communication. I’ve never talked before in the 2.4 as I had no one to talk to, but now I have to tell other people my thoughts and what I feel on the rudder. But we have got off to a good start and we will only get better.”

With every day and every race the team gain experience together and to be hovering around the medals isn’t such a bad place to be for any team, never mind a new one.

Currently above the German’s are 2015 world champions, Great Britain’s John Robertson, Hannah Stodel and Steve Thomas who took a bullet and a fourth to move back to the top of the leader board on 14 points. In second are Alphonsus Doerr, Bradley Kendell and Hugh Freund (USA) who are tied on 16 points with the German team with a second and discarded tenth for the day.

With the discards coming in to play the positions have jumped around a lot from day two, but the usual suspects are starting to bunch together at the top of each fleet and the next few days will be very interesting in the chase for a world championship title.

Racing commences on Friday 27 May with the Sonar class first to launch and race at 10.30 local time. The SKUD18’s start racing at 11.00 local time and the 2.4 Norlin OD set to start at 13.00 local out of the International Regatta Center Medemblik.

Life at Sea vs Life in Space