Tara weighs anchor: 11, 000 km left before the corals of the Pacific 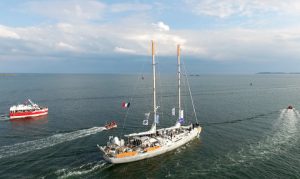 Saturday evening May 28th, Tara headed out to sea on her 11th expedition, this time to the Asian-Pacific. For the next two and a half years the schooner will sail the planet’s largest ocean, exploring coral reefs in a new way to better understand the evolution of reef biodiversity in the face of climate change.

11, 000 km before reaching the first reef in the Gulf of Panama
After a day of festivities celebrating Pacific cultures and coral, Tara left the harbor accompanied by many boats that came to bid her farewell. “The adventure continues for Tara, and also for Lorient, her home port. This voyage will encourage everyone to focus on the specificity of the Pacific Ocean and also assess the environmental issues affecting our daily lives. For elected officials of the Lorient Agglomeration, TARA represents the values of sustainable development and provides an excellent illustration of our actions in the region”, explains Norbert Metairie, president of Lorient Agglomeration and Mayor of Lorient.
From the port of Lorient to the first coral reefs of the eastern Pacific, Tara will travel 11, 000 km, (6, 000 nautical miles). After a 30-day Atlantic crossing, Tara will stopover in Miami on the east coast of the United States before entering the Panama Canal in mid-July.

40, 000 samples of coral and seawater
The first dives on coral reefs will take place immediately after exiting the Panama Canal and will continue from east to west, all the way to Japan in the first year of the expedition. This campaign associates coral biologists, chemists, oceanographers and plankton specialists who will investigate the behavior of coral reefs confronting climate change over a wide geographical area that has not yet been studied.
From June 2016 to September 2018, approximately 40, 000 samples will be collected and will ultimately provide new information on the unknown role of certain biochemical parameters — acidity, salinity, turbidity, etc. We will also study certain species involved in the life of the reefs and their adaptation to major environmental changes .

Many stopovers to raise public awareness
Reefs are true oases of life: they offer food and shelter for a multitude of species and provide a direct livelihood to over 500 million people in the world thanks to fishing. During the 2-year expedition, Tara will make 70 stopovers to raise awareness concerning the richness and fragility of reefs.
The Tara Expeditions Foundation will take advantage of this expedition to appeal to policy makers and the business world, to raise public awareness about the most pressing environmental challenges as well as the problems faced by populations who depend on an ocean in good health.

“For biologically rich regions such as lagoons and coral reefs, protective measures are increasingly needed. But parallel to conservation, it’s essential to support research — to better understand and effectively protect these reefs”, says Romain Troublé, executive director of the Tara Expeditions Foundation. Sustainable development and establishing an ongoing dialogue about the environment are long-term challenges for the beginning of the 21st century.