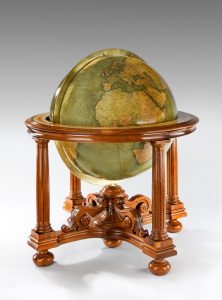 A large ‘Philips’ globe by Rand McNally & Co of Chicago from around 1928.

Globalisation of yore: antique globes are firmly on the collectables map

Based on an article by Caroline Wallrock of Wick Antiques*

One of the most sought-after antiques of the modern era owes its origin to a multi-talented Greek philosopher and practical man, Crates of Mallus, in southern Anatolia. This great geographer, whom we can now qualify as one of the ‘universal’ geniuses of his time, was reputedly head of the library in Pergamon, and is credited with having created around 150 BC the earliest known globe showing the known Earth.

He could never have envisaged how important successor globes would become hundreds of years later as an aid to navigation and symbol of imperial conquest, and how popular a purchase among collectors they would become in the last three centuries. These days, globes from many epochs are top of the charts for many antiques buyers, who like the feeling of discovery and that they can hold the whole word in their hands, or in their sitting rooms. These three-dimensional artefacts are often sold in pairs, one terrestrial and one celestial.

Crates was well in advance of his time, for as late as the 1300s, only heretics challenged the dogma that the world was flat and that seafarers who sailed too far would tumble over the edge. No matter the scientific assertions of Crates, and that more than 2, 000 years ago Aristotle proved the world was round by pointing to the shadow of the earth during an eclipse of the moon. 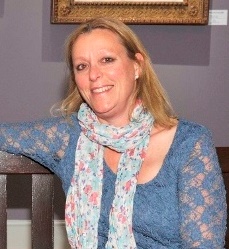 Global satellite navigation systems and the internet have replaced globes as a means of navigation and education but the allure of these spheres evoking an era of geographic discovery and pioneering voyaging remains.

In a year that was the dawn of modern advance and inquiry, 1492, Martin Behaim of Nuremberg made the oldest western globe still in existence, although the expanses depicted of sea to the west were rather too generous. Christopher Columbus and Amerigo Vespucci landed in the New World that same year, mistakenly believing that they had arrived in the Orient. Be that as it may, their voyages did fill in some large gaps in the cartography of the time.

Johann Schöner (1477-1547) of Nuremberg, who was a priest, teacher of mathematics and printer is credited with being the first person to make a pair of corresponding celestial and terrestrial globes.

A golden age of sail was opening, facilitating immense political power, sovereign territorial gain and the accumulation of unprecedented wealth. This was to be concentrated in the hands of those who controlled the high seas, especially the routes to the west. Portugal, Spain, the Netherlands, France and England set the agenda. 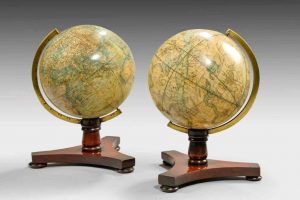 The dawn of maritime dominance coincided with the development of the printing press and posed the challenge of recording the changing perceptions of the world. Monarchs and statesmen, explorers and buccaneers, clergymen and merchants wanted the most up-to-date information – in the round! Charts and hand-held instruments were all well and good, but navigators needed a different set of reference points:  those according to the stars.

It was a golden – and silver – age too for the globe makers. First, globes were hand drawn or incised by cartographers directly onto metal spheres, often silver or gold, but only royalty or the nobility could afford them. Then scholars, scientists, engravers, printers and craftsmen combined to create a complex series of gores or elliptical strips of paper which could be printed in the flat, hand coloured and trimmed and pasted onto a globe. The globe was set into a stand which allowed it to be spun on its axis and revolved to show both hemispheres. Meanwhile astronomers captured the constellations in the skies and translated them onto a corresponding sphere; initially these were concave to mirror the heavens as seen from earth. 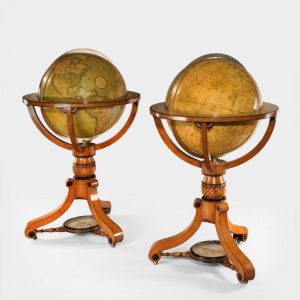 For the next 400 years returning explorers and ships’ masters would provide globe makers with their logs and records. They would market these as, for instance papers “compiled from the most recent authentic surveys of British and foreign navigators and travellers, ” or “all the Fixed Stars.”

Dutch expeditions round the Cape of Good Hope (1595), to Australia (1620) and New Zealand (1642-44) together with the granting of a monopoly of trade in Asia to the Dutch East India Company (VOC) in 1602 shifted the focus of globe making to Amsterdam. Petrus Planicus, preacher, scientist, astronomer and cartographer added stars from the Southern Hemisphere including Crux (the Southern Cross) and Triangulum Australe with 135 further stars grouped into 12 constellations named after creatures from Asia and the West Indies: Chamaeleon,  Apus (Bird of Paradise),  Tucana, and so on.

By the late 17th century fashion was changing. Globes were status symbols for emperors and kings. They had to look splendid as well as be scientifically accurate. In 1683 the Italian specialist Vincenzo Coronelli made the massive 3.85 m Marly globes for Louis XIV. They were so popular that Coronelli set up a workshop in Venice to produce large printed globes for nobility, archbishops, cardinals, ambassadors and scientists from all over Northern Europe. These valuable showpieces were often set into ornate frames, and supported by carved, painted and gilded allegorical figures. 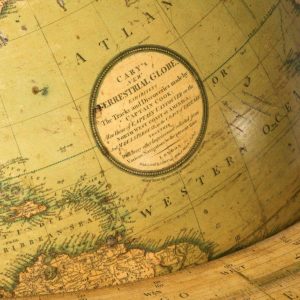 Detail of Cary globe featuring “the tracks and discoveries made by Captain
Cook” and other explorers.

Meanwhile French scientific and astronomical expeditions far afield to Peking, Peru and Lapland; more reliable clocks; stronger telescopes in the new Paris Observatory; and a study of the moons of Jupiter enabled a more accurate determination of longitude on French maps and globes. Around 1680 in London, Joseph Moxon started a trend for pocket globes which became so popular and affordable that they were soon being mass-produced.

British globe-makers derived inspiration from the scientific advances and explorations of their compatriots, the greatest of whom was Sir Isaac Newton whose studies of optics, planetary motion, tides and much more led around 1700 to an explosion in commercial instrument manufacture.

In Britain master craftsmen were unfettered by protectionist craft guilds like those in France, and thus able to meet the demand for ‘orreries’ (complicated mechanical models of the movement of planets round the sun), ‘planetaria’ ‘cometaria’, ‘lunaesolaria’, mathematical instruments, armillary spheres and of course globes.

Nathaniel Hill, globe maker, advertised his shop ‘Makes and Sells all Sorts of Mathematical Instruments in Silver, Brass, Ivory or Wood, very curious, and true graduated both for Sea and Land with Books of their Use and the best Black-Lead Pencils. New and Correct GLOBES of 3.9.12 & 15 inches diameter.”

George Adams based his celestial globes on the ‘star catalogue’ of John Flamstead, the Royal Astronomer at Greenwich, and his later globes featured the discoveries of the three voyages of 1768-80 of Capt James Cook. Cook’s voyages helped fill in many gaps in knowledge of the Earth’s coastlines. The great 19th century explorers were further able to insert new information into the ‘blank spaces’ of central Africa and the Polar Regions which had been largely ignored, and by the 20th century scientists and explorers were turning their energies to the moon, nearby planets and distant galaxies.

The firms of Bardin & Son, Newtons and the Carys dominated globe production well into the 19th century. The last named was started in London in the late 18th century by John Cary  an engraver and dealer in maps who often worked in partnership with his brother William Cary, a scientific instrument maker. John concentrated on geographical excellence rather than on decoration. The Cary family of cartographers and globe makers produced some of the greatest late Georgian globes. The striking colour scheme of such globes echoes the vogue for oak (representing gallant British battleships) and ebony (black for mourning) which followed the death of Vice Admiral Lord Nelson in 1805.

Illustrated here is a detail from an 1815 pair of Cary’s 21-inch Terrestrial and Celestial Library Globes. The terrestrial globe is inscribed “Cary’s New Terrestrial Globe exhibiting the tracks and discoveries made by Captain Cook and those of Captain Vancouver on the North West Coast of America; and M de la Perouse on the coast of Tartary, together with every other Improvement collected from Various Navigators to the present time.” The companion piece is “Cary’s New and Improved Celestial Globe on which is carefully laid down the whole of the stars and nebulae…the whole adapted to the year 1800 and the limits of each constellation determined by a boundary line.” A large compass links the tripod S-scroll legs.

On the other side of the Atlantic, at first Americans relied on English maps and globes, but Independence and greater mapping of central and western North America required domestic input. James Wilson (1763-1855) started the ball rolling, literally, with solid wooden spheres covered in papers with details from his research in the Encyclopaedia Britannica. Having taught himself every aspect of globe making and even having built his machines, Wilson made his first “New American Thirteen Inch Globe” in 1810 and was running a full factory by 1815. Incidentally this was also the year in which Harvard College first listed knowledge of geography as an entry requirement. Wilson’s progress charted the steady increase of States seeking entry into the Union; some of his globes have the prime meridian running through Washington DC.

Two Boston booksellers, Joseph Loring and Gilman Joslin seized the chance to market globes alongside their printed maps and atlases and rose to such prominence that the former was awarded a silver medal in 1838 (although the globes themselves were made and engraved by W Annin and G Smith).

By 1872, in Chicago, Rand McNally & Co was cutting production and labour costs by using full colour printing and cerography, a wax-engraving technique, so successfully that they quickly became, and remain to this day, one of the best known map publishing companies in the US. Illustrated here is an impressive large ‘Philips’ terrestrial globe from around 1928 made by Rand McNally using English papers. It is set within a walnut stand with four fluted columns joined by shaped stretchers carved with bold acanthus scrolls. It is inscribed Philips’ Thirty Inch Globe, Rand McNally & Company, San Francisco Chicago New York. The firm continues to make globes, mainly for the education market.

America also produced the first female globe innovator. In 1875 governess Ellen Eliza Fitz obtained a patent for a globe stand which showed the position of the sun and the length of daylight and even twilight throughout the year.

Globes take us back in time – to, say, when Australia was named New Holland or when the vast Lake Victoria was unknown to Europeans. When did the so-called Indian Territory become Eastern Oklahoma, or Newfoundland and Labrador join Canada? When did Yugoslavia disappear or the name Myanmar emerge? Great milestones are often cited on globes, like the position of the first transatlantic telegraphic cable, the flights of the Graf Zeppelin and of Charles Lindbergh, the construction of the Suez and Panama canals and the latest man-made islands shaped like palm trees. Equally, as symbols of wealth and good taste, as examples of timeless elegance reflecting the style and fashions of bygone eras, globes have retained their cachet.

If you want to touch the stars, if you want the world at your fingertips, invest in a globe.

*Wick Antiques of Lymington, Hants, stocks a wide selection of globes, among many other antiques specialities. Seewww.wickantiques.co.uk