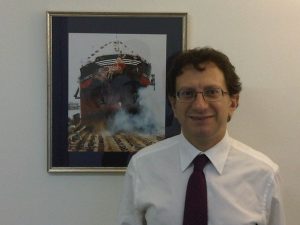 “We must free ourselves of the hope that the sea will ever rest. We must learn to sail in high winds”.

Posidonia  2016 offers the opportunity for further reflections within the shipping community, weighing up the opposing views among the main actors of the industry.

As usual, shipping is a business strongly linked to traditions and adverse to change; whereas most players seem to pursue the same path ploughed by their ancestors, frequently they are disconnected from the realty and the environment within which they work. Walking around the main shipping districts (i.e. Piraeus, Naples, etc.) I hear the same quotes heard 30 years ago when I took my first steps in shipping, like following : “the sea ails but does not die….”. Unfortunately I think differently and I should like to repeat you a famous quote pronounced by Aristotle Onassis when he said that “We must free ourselves of the hope that the sea will ever rest. We must learn to sail in high winds”. What was the hidden the message left by “Big Aris” ?

At this early point, I know that my article is provocative when I state that Onassis probably succeeded in shipping because he wasn’t a shipowner but he was first an entrepreneur: he began by trading tobacco across the Atlantic routes when Costa Gratsos suggested he buy a couple of ships to store parcels of tobacco, more or less what happens today for oil contango.

Secondly Onassis never centered his strategy on the pure asset play, nevertheless everybody thought he did. He paid attention to two crucial strategic factors: 1) knowledge and organisation, 2) ability to raise the right capital on fair terms. Going through the memoire written by George Foustanos one is aware that he overturned the traditional patterns to do shipping basing the success of companies owned on a first pillar : the development of the human factor and organisation as the way to diversify and moderate the operating risks embedded in the shipping industry. Moreover, he understood the relevant role played by international capital markets and the huge potential offered by USA banks as booster of own activities. In few words, Onassis set up a corporate body able to survive the life of founder, as a result, we still see the “Olympic” ships sailing the seas.

Concretely speaking, Onassis worked to preserve the “intangible values.”, Unfortunately this is usually ignored in the way people do shipping. He also foresaw some relevant changes in shipping markets and technologies, looking deeply forward and anticipating the competitors and disconnecting himself from traditional shipping paradigms like “shipping ails but does not die”.

He treated shipping like a common industry where you adapt your strategy as the world changes and where flexibility, knowledge, organization and capital represent the key drivers of business when the ships are apparently similar. Therefore, he leaves us a great heritage which is embedded in a few words: “We must free ourselves of the hope that the sea will ever rest”.

So what follows? Other shipowners seem not consider the lesson deriving from Onassis’s maxim. The dry bulk sector is a good example, where the shipowners accuse everybody of causing cause the dramatic doldrums, every conference is a good opportunity to submit the financiers to  summary trial without the right of appeal. Indeed, they are like a kids who play with their gift-toys and break them after their use then cry crocodile tears.

Just few days ago, I attended a financial session of well-known shipping conference where I raised a controversy with a dry bulk shipowner who threw darts at investors and bankers, stating that crisis is the outcome of he size of the order book set up by investors across recent  years. I contended that the crisis was the consequence of greedy shipowners who over ordered through the 2006-2008 boom and that we are still paying for those crazy times when shipowners thought to fill their wallets by asset resale activity and failed to pay attention to strategic changes in the market and world; therefore we do not find the cause of dry bulk collapse in the oversupply, while nobody pays heed to some crucial events: 1) China started to change from a “capex” to “opex” country, ripe to become an open market economy, 2) China controls the 56% of major dry seaborne trade in terms of cargoes, 3) China became the second ranked country in terms of fleet owned, following  closely Greece, 4) last but not least, China owns 75% of dry bulk shipyard capacity.

The above are four good reasons to consider the major dry market as a “China internal affair.” All these macro factors were easily foreseeable during the 2006-2008 boom, anyway the shipowners weren’t willing to consider it, and preferred to satisfy their appetites in speculation.

It is not true that the investors fuelled the flow of orders placed across 2012 when the largest part of these derived from the impulse of greedy brokers to many shipowners attracted by “eco-design fashion”. Unfortunately for my counterparty-shipowner in the discussion I mention, he wasn’t able to reply because by looking at the following figures you will become aware that Investors caused a mere roughly 18% of the current orderbook. 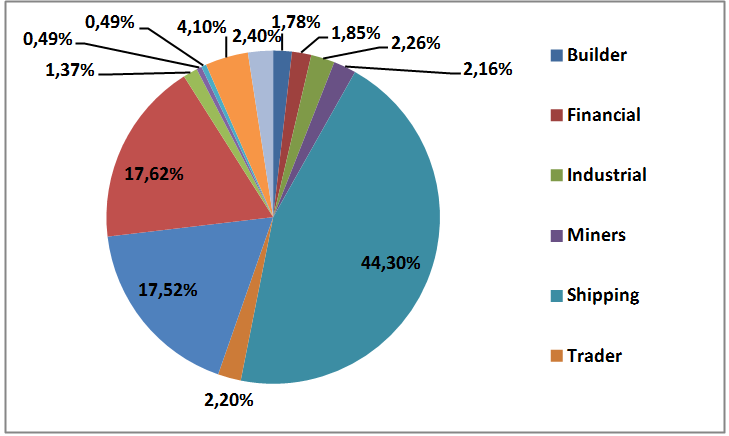 My grandfather used to say : “before you speak, fill your background with solid numbers and connect your brain!”  Therefore, in conclusion, the real losers in dry bulk are predominantly banks constrained to write off consistent losses in their books and investors who are suffering for the genuine investments done, while the shipowners are prompt to accuse them unfairly, instead of reflecting on their mistakes.

Looking forward, I see substantial changes in shipping finance, since the following factors affect consistently the market: 1) new banking rules in respect of capital absorption, as the Basel III and SREP/AQR will constrain ability to deliver, 2) shipping lending has practically dried up and many relevant players have walked away (e.g.. Commerzbank, RBS, HSH) or downsized their portfolios (NordLB, CA), 3) yield close to zero or negative incentivizes  the institutional investors (insurance companies, pension funds etc) to find alternative asset classes for their reserves, 4) thus growing the appetite for high yield asset classes, facilitating a kind of disintermediation under which the shipowners will raise directly funds from primary sources (institutional investors).

In conclusion, I think that we can find the future of shipping finance in direct lending and alternative markets like bonds and “private debt funds” which ensure a kind a “shadow banking” by flexible solutions which satisfy the needs of financial investors, while the traditional banks will stay out of the market for a long time.