Keeping your cards close to your chest 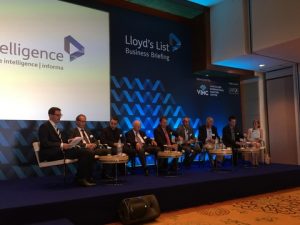 Keeping your cards close to your chest; this is the message I’ve got earlier on tonight following the great debate – as you might have seen same uploaded in the social media and probably in the news. It was a debate only between the panellists, given just three questions aired from the 300 strong audience, due to the limited time… John Faraclas reports:

Nine people on the…dock, eight gentlemen and only one lady! Richard Meades, the Editor of Lloyd’s List, Chris Palsson from Lloyd’s List Intelligence, Harry Vafias from Stealth, George Prokopiou of Dynacom Tankers et al, Jeffrey Pribor from Jefferies, John Coustas of  Danaos, Paddy Roggers from Euronav and Christian Waldergrave from Teekay; the lady: Mariella Bottiglieri emanating from an Italian shipowning family since 1850, who did more than well, not just for what the audience applause her for (the one night stand), but for her coolness in siding with tradition that never loses its steam – remember this!

…bulk freight rates have not been on a pleasure ride…

I am sure Richard Meades was more than pleased from the turn-out as events of this kind, no matter what day or date is, are always a full house in Greece!

What happens next? Well as per the title of our reporting, nobody is gone to tell you or me. It remains to be seen from the results of the panellists’ companies what we will read in the news one day…

A simple presentation, easy to understand was delivered by Chris Palsson and hope the …divide line on the right, in his well construed slides, comes out correct, right!

One thing is for sure that there is no cycle anymore given the parameters prevailing in the markets today and the unprecedented geopolitics! This was precise the two issues which we were attempted to ask, but time was limited. We can assure you though, that given our track record in correctly predicting via projective prognosis the markets, we advise caution in all fronts and you must learn to swim alone! 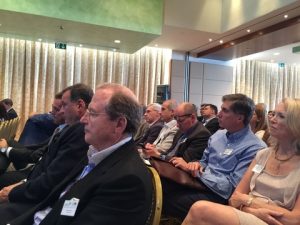 Issues raised by the panel:

Basically the refund guarantee, overcapacity, human element issues, China, the rich people creating wealth, funds availability, the shipyards themselves, oil prices and tankers as well as production, charterers paying the hire, and other energy matters where the main issues the panellists raised.

From the audience, first come Dr. Helen Thanopoulou from the University of Aegean who landed a tough question, which I am afraid wasn’t either fully “understood” from the panellists, and conversely replied… She asked: “What do you think the increasing income inequality worldwide will mean for shipping demand as it affects consumer purchasing power? 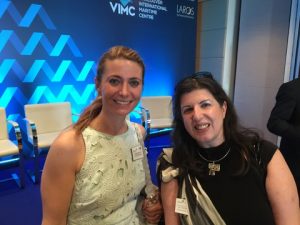 The second one come from Peter Pontikos of Laskarides Shipping and was quite another right strike to the right direction; he asked: “ Why won’t owners through their unions in a concerted effort apply supply side tweaks in a cartel like manner and impose to those who overregulate to pay back money’s to those who lay up?

The panel, I guess nodded in agreement!

There was a third question from Lambros Papaeconomou, Lloyd’s List’s New York correspondent: “India and Africa were identified as the next areas of demand growth. Why is Latin America not considered a growth area along the same lines?” the response come at the networking drinks reception…

All in all it was a good forum given that all stakeholders were proportionally represented in the panel and the audience was great; who wasn’t there. It remains to be seen what will happen next! Remember: “News is what they don’t tell us!” I am sure you get the message! 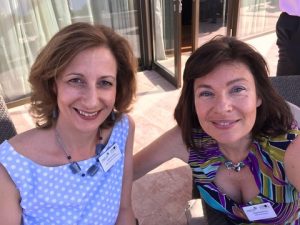 At the drinks and dips reception, networking with the unique views from the veranda were more than interesting and unique! There isn’t any other place on Planet Ocean to compare the sunrise nor the sunset. Facebook uploadings by dozens members of the international shipping fraternity, speak of themselves!

Enjoy Posidonia 2016 exhibitions and hopefully the forthcoming debates too! Have a great time in Greece and capitulate in the networking; at least you can hear what people really think, despite if same comes true, or you disagree…!

P.S.: Read and study carefully the  Lloyd’s List Intelligence June 2016 great issue handed out today, as there are interesting articles by Helen Kelly, Nigel Lowry and their team!