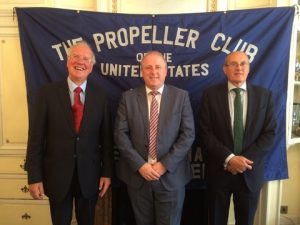 With the sun shining brightly in London, 20 members of The London Propeller Club and their guests gathered at The Naval Club in Mayfair, for the May luncheon.

Club President, Commander Ian Millen RN had the pleasant task of introducing new member, Lars Lewis, who had travelled from his office in Paris especially for the luncheon.

After a fine meal and the customary loyal toasts, to both the Queen and The President of the United States of America, Ian introduced the Guest Speaker – Mr Colin Middlemiss, Clerk to The Company of Watermen and Lightermen of the River Thames.

Since its inception, there have been only 14 Clerks (Chief Executive in modern parlance) – which averages at nearly 33 years per incumbent! Colin himself has been Clerk for 19 years, having previously worked as a commercial property lawyer.

Colin began by providing some interesting facts about the history of the Company. It was officially formed in 1555, by Act of Parliament, to regulate the Thames; and the Company introduced apprenticeships for those wishing to learn the skills of the Watermen. At that time the Thames was the main form of transport across London and Watermen plied their trade by ferrying passengers.

In 1700 the Lightermen (carriers of goods/cargo) joined the Watermen’s Company.

With the invention of the hackney carriage, and improved roads and bridges across the river, trade for the Watermen declined. Conversely, this increase in activity was a boon for the Lightermen.

The Company is also responsible for organising, in conjunction with the Worshipful Company of Fishmongers the oldest, continuously, run single sculling race in the world, The Doggett’s Coat and Badge; which was inaugurated in 1715 by the Irish actor, Thomas Doggett. The race is held every summer between London Bridge and Cadogan Pier (Chelsea) – the sites of the Old Swan Tavern and the Swan Inn Chelsea; with up to six apprentices rowing under 11 bridges on the 4½ mile course, and the winner being presented with a scarlet coat.

Coming forward to the present day, there are now 650 registered Watermen/Lightermen (down from 400, 000 in its heyday). To increase numbers, over recent years the remit has been broadened to include: people who row on the Thames for pleasure/sport; and craft-owning tradesmen – expanded to cover lawyers engaged in Maritime Law.

Education and training is now a big part of the work done by The Company; and they currently have 162 apprentices engaged on their five year programme. The qualification is MCA accredited and there are opportunities for a seamless progression into the Merchant Navy: Canal – Tidal Thames – efficient deck hand – Merchant Navy.

It was good to hear that, currently, work is booming on the Thames.

For the Watermen, the River Bus Service was restarted in the 1990s (after an earlier failed attempt at running a commuter service). With the support of Transport for London, who realised that the Thames was essential for travel around London, this service is flourishing – currently there is a fleet of 21 vessels employed in this trade; which currently ferry 12 million passengers per year around London!

For the Lightermen, the Thames Tideway Tunnel has proved to be a boon. At 14 miles in length, and twice the size of a tube tunnel, the freight traffic to remove waste and deliver supplies for the Project is a major boost to employment.

The question of safety on the River was raised, especially with regard to how an accident similar to the Bowbelle/Marchioness disaster in 1989 could be avoided. Colin responded by saying that with safety paramount, a number of crucial changes have happened since the incident, which  have made a repeat highly unlikely. Firstly, modern boats are designed and built better. Secondly, thanks to improved training and regular re-testing, the skill sets of captains and crew are more advanced. Thirdly, the Port Authority manages the River far more safely and efficiently these days.

Colin also shed light on where the name of ‘Lightermen’ comes from, as well as the phrase ‘lightening the load’  – the barges are called ‘lighters’, and would offload the bulk of their cargo at the estuary, before coming up the Thames with a ‘lighter load’!

On behalf of everyone, Ian thanked Colin for such an insightful and fascinating talk into something new to most people in the room.  He also said that the regulations and compliance show that lessons have been learnt and it is good to know that travel on the Thames is safer than ever.

Ian concluded by notifying members that Club ties were now available for purchase and investigations would be made into something suitable which female members may prefer to buy.

We look forwarding to welcoming everyone to the next Propeller Club Luncheon, on Wednesday 30th June at the Naval Club, Mayfair