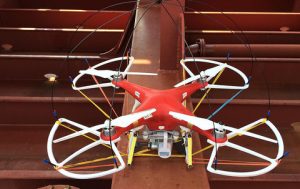 Athens, 7 June 2016: Classification society DNV GL announced today at the Posidonia trade fair that it had recently completed the first production surveys using an unmanned aerial vehicle (UAV) or drone. The survey took place on the MV Apollo, a chemical tanker owned by Carl Büttner Shipmanagement GmbH, in Bremerhaven, Germany. Two DNV GL surveyors used the drone to inspect 14 tanks over a period of two and a half days.

“The advantage of using a drone over conventional staging inside the tank is absolutely clear, ” says Jochen Huhn, Marine Superintendent and Chief Security Officer, Carl Büttner Shipmanagement GmbH. “Eliminating the risk of damage to the coating from staging means the drone survey is worth it, even before we factor in the time saved by this method. We were also all very impressed by the quality of the video and the details the drone was able to obtain in the inspection. We would certainly be interested in using this method more in the future and I am interested to see how the technology develops over the next few years.”

“The success of the first drone production survey performed by a classification society shows how our investment in developing modern class solutions to benefit our customers is paying off, ” says Knut Ørbeck-Nilssen, CEO DNV GL – Maritime. “Over the next few years we will continue to work on expanding the ways the drones can be used and the number of stations where we can offer this service. This is a very promising beginning and one that is already showing a significant benefit in terms of time and costs saved.”

The inspection of ship tanks and holds can be a costly, time consuming and potentially dangerous operation. The condition of the coating, corrosion, damages, piping, access points, equipment and safety systems all have to be assessed on a regular basis. Using drones to visually check the condition of remote structural components has the potential to significantly reduce survey times and staging costs, while at the same time improving safety for the surveyors. DNV GL has now carried out several tests using drones for the inspection of cargo tanks or holds in a large oil tanker, a chemical tanker and a bulk carrier, both in Europe and in China.

In the future it may be possible to use drones that are fully autonomous. A 3D model of a vessel could be loaded into a drone’s memory, which could then orientate itself inside the tank and follow a pre-defined route, stopping at points of interest inside the compartment to capture video and still images. The operator could use the camera and lights to document findings, while the drone’s autopilot takes care of the flight. At some stage it may be possible to have a drone with its own scanning capabilities. The drone could be dropped into an unknown space, make a scan, create its own 3D map and then proceed to carry out the survey independently.

Currently, DNV GL is also looking into utilizing drones and other alternative means for inspection of MOUs, both for topside and external structure and for internal tank inspections. Another ongoing project is to establish a certification service for external drone operators to qualify to perform inspection work on classed MOUs.

Driven by its purpose of safeguarding life, property and the environment, DNV GL enables organizations to advance the safety and sustainability of their business. Operating in more than 100 countries, the company’s 15, 000 professionals are dedicated to helping their customers in the maritime, oil & gas, energy and other industries to make the world safer, smarter and greener. For more information visit www.dnvgl.com/maritime

Oslo Børs: Changes to the composition of the OBX Index from 17 June