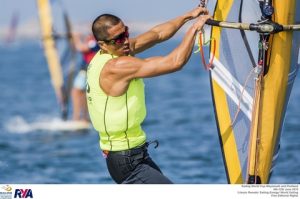 Aichen Wang (CHN) was the sole race winner on the opening day of Sailing World Cup Weymouth and Portland as light winds plagued the venue of the London 2012 Olympic Sailing Competition.

Racing was scheduled to kick off at 11:00 local time but a distinct lack of breeze left racers stuck ashore. As several classes were postponed late in the day, the RS:X and 49er fleets got out into Portland Harbour at 16:00 but only the Men’s RS:X completed a race.

The victory went the way of Wang and he was followed by Toni Wilhelm (GER) and compatriot Chunzhuang Liu (CHN). “It was a light and shifty one, ” explained Wang’s coach Tom Ashley, Men’s RS:X gold medallist at the Beijing 2008 Olympic Games. “Aichen got a good start and then it was a little bit of a procession after that.”

Wang is ramping up his preparations for the Rio 2016 Olympic Games and Weymouth and Portland plays a key role in that process. Ashley continued, “We are here, partly for the event and partly for the training. It’s still reasonably early in our racing phase so he’s not very sharp, but that’s okay. We aim to use this to sharpen him up and hopefully look towards a couple months’ time.

“We haven’t done any proper racing since February. We had a break and then got back into base training. I think we’re doing everything right and moving along well but it’s quite hard to tell. If you’re really sailing well at this point, then you’re probably doing something wrong but on the other hand it can be frustrating when they’re making mistakes or not going fast enough.

“We’ll know more in a couple of months’ time.”

Wang put his name into the hat as a serious Men’s RS:X Rio 2016 contender in 2015 as he took gold at the Olympic Test Event, which often acts as the dress rehearsal for the main event. Along with Women’s RS:X compatriot, Peina Chen, the 31-year-old was nominated at the National Sports Awards in China for his achievements.

Olympic victory in China equals new found fame and overnight you can become a national hero.

After Lijia Xu won gold at London 2012 she was thrust into the public eye and was a national sensation. Shortly after that, she was a global sailing superstar as she picked up the Rolex World Sailor of the Year Award in 2012

Success within a nation can have a huge impact on the profile of any sport as Xu explained, “After winning the gold in 2012 it was a big surprise for all the Chinese and the population got to know more about the sport. There is a rising trend for people getting to know about sailing and I’m still trying to help all the young, amateur sailors to get involved in sailing.

“I am very happy to see more Chinese people involved in sailing and hopefully this trend can keep going on and it can be more competitive, not only Olympic sailing but other areas of sailing as well.”

As for Wang’s coach, Ashley, having been there, done that and got the t-shirt, in China of all places, he remains cautious of the attention his protégé is receiving, “There’s been a bit of media attention as well and their nomination was a big thing for sailing but it’s a double edged sword. If you get too much attention and too much pressure, going into the Olympics can be a bit of a problem. We try and minimise the impact of that as much as possible.

“If the guys do well and raise the profile, then as that shift happens then it must be good for sailing.

“China is such a huge country that you’ve only got to get interest from a small percentage of Chinese people and all of a sudden you’ve got an audience of 50 million. It’s probably not too hard to become a millionaire in China if you have some success. Lily [Lijia Xu] has probably pushed that quite well for herself but we prefer not to think too much. Hopefully we’ll cross that bridge when we come to it but we’re focusing on the job at hand for now.”

Racing resumes at 11:00 local time on Thursday 9 June and will conclude on Sunday 12 June with the Medal Races which will be broadcast live on the World Sailing TV YouTube Channel – http://www.youtube.com/worldsailingtv