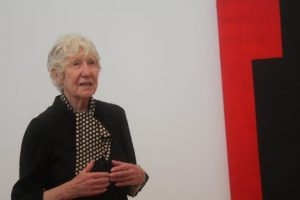 Born in the Richmond district of San Francisco that borders the pounding Pacific, Mary Heilmann has always loved the ocean, an enthusiasm that has been reflected in her artistic work throughout her life. As a child, she and her friends could not resist diving in from the seashore, “and even though it was cold water and there were no wetsuits in those days, we all went in.”

Most her adult life she has dwelled on the east coast of the US, and now on Long Island she has the Atlantic at close quarters. In her seventies, full of zest and good humour, Mary has been in London for the opening of the first major UK survey of her work, at the Whitechapel Gallery.

She has been talking of the West Coast beach life, the 1960s counter culture, her passion for film and pop music, and friendships with New York artists, poets and musicians, with a story often playful, to tell of the origins of each of her mostly abstract output. Several of the 45 paintings, ceramics and chairs from her five decade career are being exhibited for the first time.

Whitechapel Gallery chief curator Lydia Yee said that early on, as a woman artist, Mary “could not get any attention for her sculptures” despite the fact that many male sculptors were doing well, so had explored ceramics on the theory that “ceramics are hybrids between painting and sculpture.” Mary’s time at the University of Berkeley California made her “a “huge fan” of the minimalist sculptor Carl Andre, and David Hockney had taught there just before she graduated, although otherwise she found the university painting department “really conservative.”

Moving to New York in 1968, she endured gender discrimination from the unofficial painting establishment, but thrived in a hippie commune in Chatham Square “where we rented a full building for $500 in 1970. The building was totally ‘unrehab.’ It was a big scene there and it was rough.” She mixed with Steve Reich and Philip Glass, still among the world’s greatest composers, and other personalities who “were always hanging out in the Chinese butchers’ and talking about vegetables and cooking.”

The Whitechapel show covers most bases, starting with her early geometric compositions in the 1970s including canvases in which she used her fingers to manipulate patterns – just the technique innate to ceramicists – ending up with an irregular grid. There are the ceramics themselves, such as Cup Drawing (1983), almost flat, of simple design but memorable, and it is clear how these creations linked with her approach to painting. 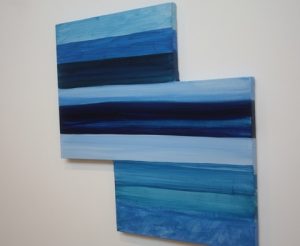 Mary settled into painting, guided by the ways of masters such as Henri Matisse and Piet Mondrian, and directly acknowledging this. Examples are Matisse (1989), a white and dark blue canvas in squares with a geometric motif, and the rectilinear forms in four colours of Little Mondrian (1985).

There is nearly always a light touch.  She made a slide show,  Her Life (2006), which features her work and adds photos she has taken over the years of everyday phenomena such as neon signs, parked cars and the ocean. She said that after she added a few photos to the show, her acquaintances loved the production…

In fact her work is not strictly abstract in that it always relates closely to some facet of her personal life, tastes in pop culture, films, plays, places of residence and especially… the ocean. Her beloved surf is to the fore in perhaps the most dramatic piece of the whole show, and one which is used prominently for its publicity: Crashing Wave (2011) which vividly evokes the untamed shoreline in rich greens and blues.

Recent works aligned with road trips and road movies include No Passing (2011) and Maricopa Highway (2014). In 1991, theLos Angeles Times headlined an article about the highway: “The Road Less Traveled : You won’t find much along Maricopa Highway, but what you do find can get pretty interesting.” 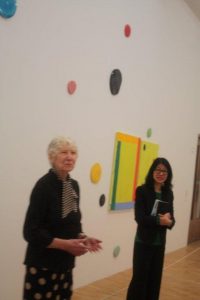 Bush of Ghosts (1980) is an acrylic whose title echoes that of the multi-style album My Life in the Bush of Ghosts by two rock giants, Brian Eno and David Byrne, the record itself taking the title of a 1954 novel by Nigerian author Amos Tutuola.

Visitors can ease their “museum legs” by relaxing on strikingly-coloured wooden chairs made by the practical Mary. “I always built my own furniture, ” says the artist, although originally not chairs. “I am always thinking about furniture.” Assisting Lydia Yee in curating Mary Heilmann: Looking at Pictures is the gallery’s assistant curator Habda Rashid. The term Looking at Pictures refers to a section in the artist’s memoir,  The All Night Movie (1999), about the autobiographical nature of her work. 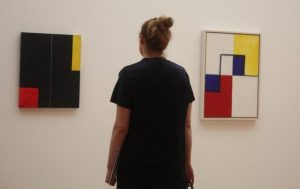