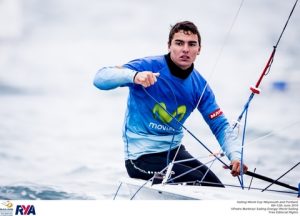 Jordi Xammar of Spain in the 470 – ©Pedro Martinez / Sailing Energy

Sailing World Cup Weymouth and Portland shifted up a few gears on Thursday as all of the ten Olympic fleets took to the water to tackle a bumper day of racing.

Wednesday’s little to no breeze and bright sunshine was replaced with strong easterly winds and fog on Thursday morning. As the day progressed, the breeze dipped and the fog disappeared as a full schedule of 34 races spread across all ten Olympic fleets concluded.

For all but the Men’s RS:X, it was the start of the competition after Wednesday’s frustration and the serious Rio 2016 Olympic contenders took to the front of the packs.

Sailing World Cup Hyères winners Lisa Ericson and Hanna Klinga didn’t immediately pick up from where they left off just a few short weeks ago as they were OCS in the opening race. However, they quickly found the form that helped them win in Hyères, following up with a third and double bullets to lead the fleet.

“It’s the beginning of the regatta so anything could have happened today, ” explained Klinga. “Apart from the OCS, we are happy but we will take less chances now because we can’t afford to get another bad result, but we will think exactly the same as normal, just race and look forward.”

The Swedes have moved into serious contenders for an Olympic medal and have got their spot at Rio all sewn up. They were involved in a long running battle for national qualification, facing up against Julia Gross and Cecilia Jonsson, one in which Ericson and Klinga triumphed. However Gross and Jonsson are still keeping their rivals on their toes and sit one point behind them on the leader board.

The Agerup sisters will be heading to Rio 2016 and are using Weymouth and Portland to sharpen up, “We wanted to have some racing before the Olympics so that’s why we decided to come here. We only got selected a few days ago by the Olympic Committee so it’s been pretty full on. We have been training in Rio the past couple of weeks and we will go out again soon.

“We take this regatta as good training and we will push it and see how far we can go.”

The 49er fleet touched back ashore at 18:20 after four light and tricky races. New Zealand’s Logan Dunning Beck and Jack Simpson continue to fly the flag for the nations 49er sailing, leading the 30-boat fleet on 12 points. Spain’s Diego Botin and Iago Lopez and Great Britain’s Dylan Fletcher and Alain Sign follow behind the Kiwis.

Consistent scores across a series of races often makes the difference between a top five finish and a top 20 finish.

Even though Jordi Xammar and Joan Herp (ESP) are eighth overall after three races in the Men’s 470, their score card is the most impressive in the fleet. Two sixths and a seventh ensures they are the only team to have a card of three results in the top ten.

They are only six points off leaders Sofian Bouvet and Jeremie Mion (FRA) with five fleet races and Sunday’s live Medal Race to follow. “We were laughing, paddling along, ” joked Xammar when asked what he and Herp were doing differently, “Nothing special really.

“We were trying to have good starts, make it easy for ourselves and not take big risks. We were also a bit lucky and on days like this you need a bit of luck.”

The Spaniards are two of the most vibrant characters around. From scaling the walls of the Santander spectator lagoon to greet their supporters at the Worlds in 2014, to crossing the finishing line at rain filled Junior European Championships holding up an umbrella. They know how to have fun. They also know how to be competitive athletes and will head to Rio 2016 this summer.

In the Women’s division there is a three-way tie. Switzerland’s Linda Fahrni and Maja Siegenthaler and the British teams of Hannah Mills and Saskia Clark and Sophie Weguelin and Eilidh McIntyre are all locked on four points.

Canada’s Nikola Girke is one of the most dynamic sailors around. She sailed in the 470, a two-person dinghy at Athens 2004, the windsurfer at Beijing 2008 and London 2012 and in Rio, she’ll sail the Nacra 17, a multihull.

At the morning’s press conference, a modest Girke explained what it takes to transition, “I don’t know if it is about talent, more like hard work and determination.

“If things go wrong it’s just all part of the game. You learn from it and it shouldn’t shatter your confidence, it’s just another stepping stone to learn something.”

Taking those attributes into the first four Nacra 17 races certainly paid dividends for the Canadian and after a 1-2-3-(13) scoreline, Girke and her helm, Luke Ramsay, lead on six points.

Girke has the experience and knows how to manage an Olympic campaign to peak at the right time and no matter what happens in Weymouth and Portland, it won’t derail her from the end goal. “It’s all towards Rio and it’s a different venue here, ” explained the Canadian. “It’s [Weymouth and Portland] against most of the top competitors and you want to see how you rack up against them, but you learn from your mistakes and that’s the whole campaign. You learn from your mistakes all the way along to win at the end.

“It would be nice if it always clicked but it doesn’t always click. We have been working on many little things and slowly we have been piecing them together. Putting a couple of races gives you confidence for the next one.”

Great Britain’s leading Finn sailors Giles Scott and Ben Cornish share the lead on three points in the 11-boat fleet after a trio of races. The pair took a race win apiece with Fabian Pic (FRA), sitting third on seven points, taking the other.

Henry Wetherell (GBR), Max Salminen (SWE) and Jonathan Lobert (FRA) are tied on points with Pic after the three races.

The 2016 edition of Sailing World Cup Weymouth and Portland is Salminen’s second appearance on the waters he won an Olympic gold medal on. Sailing with Freddie Loof in the Star, the pair won gold at London 2012 in a tense Medal Race.

Four years on and the same waters are proving critical for his next Olympic preparations. “We don’t get many days like this in Weymouth, ” said Salminen, “but it is great practice for Rio. I’m happy with what we got.

“It’s going to be a light wind regatta in Rio, I think, and having it light here is a big bonus. It’s a small fleet but the main rivals are here.

“It’s good to get in the racing mind set and at the beginning of the year this regatta really stood out as the one I need to do because I wanted racing close to the Olympics.”

China’s Peina Chen made it a clean sweep of race victories in the Women’s RS:X, taking all three convincingly. Chen leads and is followed by Emma Wilson (GBR) and Isobel Hamilton (GBR).

The overnight top two in the Men’s RS:X, Aichen Wang (CHN) and Toni Wilhelm (GER) remain in the podium positions but they will have to tread carefully for the remainder of the regatta. They were black flagged in the final race of the day along with four of their rivals in the fleet.

Wilhelm leads on five points following a first and a second in the day’s opening races and is followed by Chunzhuang Liu (CHN) on six points and Wang on nine.

Tom Burton (AUS) had a mixed start in the Laser. He started off with a second and a first but in the final race, sailed in challenging, light conditions, he came through in 17th. Nonetheless he is the early frontrunner and has a four-point advantage over race one winner Elliot Hanson (GBR) and Jesper Stalheim (SWE). The day’s other race win went to the fourth placed Belgian racer, Wannes van Laer.

After three Radial races, the top three nationalities replicate the positions of the flags at London 2012, China, the Netherlands, then Belgium. The familiar faces of Lijia Xu (CHN) and Marit Bouwmeester (NED) remain but Emma Plasschaert is leading the charge for Belgium with the London 2012 bronze medallist, Evi Van Acker, 15th after a black flag in the opening race.

Each sailor took a race win and Xu leads on three points. Bouwmeester follows on four and Plasschaert on seven.

Plenty of racing remains over the next three days and Friday will be used to continue the catch up on Wednesday’s missed races.

Racing resumes at 11:00 local time on Friday 10 June and will conclude on Sunday 12 June with the Medal Races which will be broadcast live on the World Sailing TV YouTube Channel – http://www.youtube.com/worldsailingtv