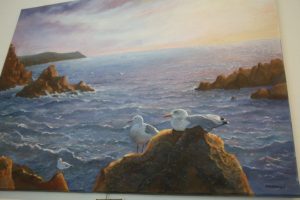 Brenda Fraser, mayor of the London borough of Merton, praised the role of amateur art in the community when she formally opened the 2016 Merton Art Society Exhibition at Morden Hall Park on June 11.

Civic recognition is greatly appreciated by the many enthusiasts for brush and pen throughout the UK, and this was especially so as this particular society has a new venue for its show: the modernised Morden Hall Park Stable Yard Gallery, a National Trust property. 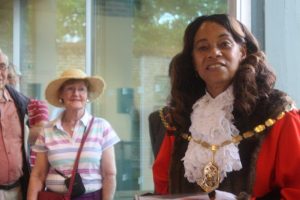 The estate is a special slice of history. Created by the Hatfeild family in the 19th century, it hosted film star parties in the 1940s before being left to the Trust. Renovations are said to have made the stable yard complex the most energy-efficient historic building in the country.

Dozens of works in many styles and mediums were on display and the show, with free entrance free to visitors, continues untilJune 26. Most works are for sale, at modest sums.

The significance of the event is much wider than the local (and by local is meant here a huge catchment area, including Wimbledon, Morden and Mitcham). It underlines that art is flourishing as never before in town and country at the amateur level. Across the UK hundreds of art societies are providing encouragement and guidance for members who range from practised painters to pensioners who in retirement become devotees. 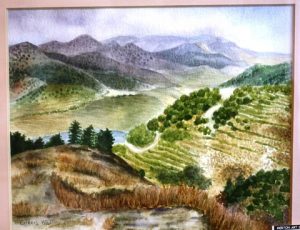 Merton is one of the societies with the longest pedigree, having been founded more than half a century ago. It brings together a palette of personalities and resources, smoothly guided by current chairperson Debbie Mandelli.

The mayor, in one of her first engagements since assuming office on May 18, acknowledged the society’s service to the area over many years. Mrs Fraser recalled taking an interest in art since being a child at secondary school in her native Jamaica – from where she migrated to the UK in 1965 and made her home in Mitcham – and she told the gathering that she found drawing therapeutic.

Councillor Fraser, who spent much of her career in the health sector, has made mental health and Age UK her charities for her term as first citizen.

Evidence of the creativity of society members is plain, and is spurred by the series of expert talks, demonstrations and critique sessions put on throughout the year. 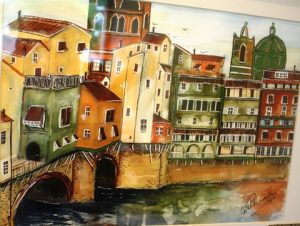 The Merton group meets one Tuesday every month and exhibits once or twice a year, depending on circumstances. Membership fluctuates around the 50 level.

Mention of some of the exhibits will give an idea of the variety of subject matter, medium and scale on show.

Rahila Heasman uses her skill in watercolour to depict The Beautiful Sea. Eileen Wall uses the same medium to show the lesser-known interior landscape of Cyprus.

Stylised architecture is a forte of Vivien Pharaoh, who gives an unusual take in mixed media on Florence, and nearer to home a view in watercolour and pen of Church Walk. Marcelle Burton is captivated by an aspect of Monet’s Garden, for which like the master she applies oils.

Graciete Amaro, who is inspired by landscape and the contortions of tree branches and roots, shows works including Lone Tree (watercolour and gesso) and Forest Trail (acrylic).

Two of the most dramatic works are by established painter Daniele Mandelli, who has switched subject from his green landscapes on this occasion to show The Gulls and Waterhole, both in oil paint.

Among sponsored prizes was a National Trust Choice award, which went to Julie Brook for her oil painting of a subject close to the NT’s heart: Morden Hall Park. 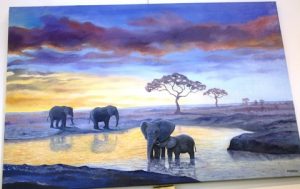 According to A History of Merton Art Society, a booklet which the authors say was “typeset on an aged composing machine” and is now out of print, the origins of the society go back to an exhibition of nearly 300 paintings put on by Merton & Morden Civic Society in May 1963. The art society was launched later the same year, with a subscription of 25 shillings.

At first there were annual social events to the music of “squeaky records” and later to live bands for dancing. These days the focus is on refining skills on the drawing board and easel. 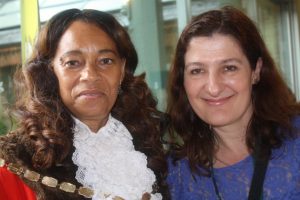 Fred Edwards, who was five times chairman of Merton Art Society, said in 1979: “We are a happy society of people, pursuing an interest and furthering one of the most refining influences of civilisation.”

The UK is noted for its plethora of art societies and associations, many with specialities such as those with a focus on women artists, drawing, watercolour, marine subjects, wildlife and other themes.

Merton Art Society is among those listed on the site www.painters-online.co.uk which gives details of 563 others in the UK alone and 19 online groups. The site promotes two magazines,  The Artist, and Leisure Painter which are full of practical advice. A search on the site for the word London yielded 1, 106 results – many of them related to artworks. 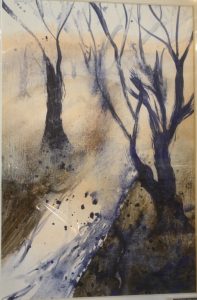 Separately, the SAA (“the society for all artists”) says it has well over 1, 300 affiliated clubs, including seven in the London area. The SAA claims to be “the most influential and far reaching society of its kind anywhere in the world… with an ever growing ‘family’ of enthusiastic and eager artists (over 45, 000 members) it’s the largest art society