With minus four points the BDI poses many questions for the market’s recovery; good opportunities though lay ahead; John Faraclas writes:

So the midweek-blues are here to stay, particularly when the volatile Capers dive 18 points bringing the respective BCI 2014 down at 1, 000 points flat!

The Panamaxes surprisingly though gained two points – now standing at 545…

The BSI remained the same, no change at 552 points, but the BHSI lost two points, now reading 315!

So all in all a bad dry market and wonder the feeling if the BDI goes below the 600 points. We are sending you the message of …Dry Caution!

The Wets were also down; both the BDTI and the BCTI had losses – eight and ten points respectively now standing at 705 and 461 points.

The price of WTI down too – this moment as we write these lines it stands at US$ 47.84…

The Geopolitics continue to be crucial affecting us all with the Migrants issue possibly influencing the BREXIT / Remain vote on the forthcoming Referendum next week in the United Kingdom and William Shakespeare might have been the only one to predict the result… and its repercussions? In all aspects on this Referendum new issues appear: what will happen say in Gibraltar… We hear a lot of interesting views; one being that the United Kingdom will fully capitulate on its Commonwealth aspect and its 1, 6 billion people, why not – for arguments shake eh! This will be by far the most powerful economic and political block and I am sure Mrs. Merkel would like to see the Albion rising again; same applies for the other side of the Atlantic! Indeed 1.6  billion people will make the big difference and the Hong Kong status might be again very useful!

Elsewhere pretty much the same with Hillary Clinton getting ready to counter Donald Trump’s irrational behaviour; The Orlando Massacre is more serious than originally envisaged; The Russians as aggressive as ever; Turkey on the brink of a mess both internally and externally… Greece is still in a very difficult position and all things being equal expect the unexpected! We will have a full Geopolitics coverage this coming Friday…

Despite all the above and other happenings, this is a great opportunity to acquire tonnage, particularly newbuildings of any kind! The best buyers’ market we have ever experienced! Time to get the business revenge from the greedy shipyards and at the end of the day save them! At the Posidonia  2016 five major debates, shipowners interested  in a buying spree,   preferred the  second hand market- we disagree, as this will slow down the world economy in its entirety. Putting the parts (parameters) of this puzzle together you can see the end result and support our argument. On another tone, listening to shipowners is one thing, obtaining the right view from them yet another. No one comes out to tell you in the open what she/he will do… Come on, grow up!

Viewers can log here below and read VesselsValue’s latest supporting our view on how good is to acquire new tonnage: 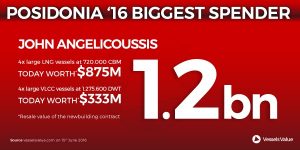