The global tramp carrier successfully lifted each RTG at both the port of loading and the port of discharge, deploying the two cranes of the HHL Kobe, which have a combined lifting capability of up to 800 metric tonnes.

In order to accommodate all four pieces of cargo on deck, a so-called “flying deck” was created on-board the vessel, which is a transversal extension platform and consists of two tween deck pontoons to provide an extended stowage area. 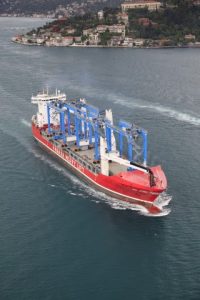 “We had to pay special attention in positioning the cargo due to the small tolerance for placing the flying deck and driveway pontoons on hatch covers, ” said Ian Broad, Director Cargo Management, HANSA HEAVY LIFT.

“In addition to a structural assessment, several 3D simulations were required during the planning stage due to the height of the cargo to find the perfect manoeuvre needed to avoid the boom structure of the vessel’s cranes coming into contact with the unit during placement.”

The first two RTG cranes, once lifted, were driven to the forward end of the hatch covers using their own electric motors. The third was lifted using the on-board cranes and placed onto two tween deck pontoons, which then acted as driveway access to the flying deck pontoons

Once the driveway tween decks had been removed, the fourth and final crane was lifted and placed on the hatch covers between the cranes of the HHL Kobe.

Only a small gap of 9cm was left in-between two of the RTGs so that one of the vessel’s own cranes could be brought down to a resting position, in order to avoid violating air draft restrictions in the Bosporus Strait.

“Keeping in close contact with the customer right from the early stages of the project, as well as successful cooperation on site, helped us to eliminate all of the possible risks involved and allowed us to execute the project smoothly, ” said Joerg Roehl, Chief Commercial Officer, HANSA HEAVY LIFT.

“The key to our success was the outstanding cooperation between the transport engineers from deugro and HANSA HEAVY LIFT. We focused on the solutions, instead of the problems, to solve any issues that arose, ” said Pasi Mantila, Operations Manager at deugro (Finland) Oy.

HANSA HEAVY LIFT specialises in the transportation of super heavy lift, heavy lift and project cargoes, with a particular focus on transportation and installation (T&I) in the subsea oil and gas market as well as the offshore windfarm sector.

Sovcomflot and Gazprom Neft sign a Memorandum of Understanding

Change in concept of operartion of IMCA’s CMID system