Coming up… The Inauguration of the Expanded Panama Canal on 26 June 2016! 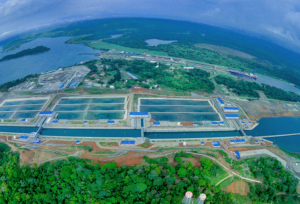 The Panama Canal Expansion is the largest project at the Canal since its original construction.

The project will create a new lane of traffic along the Canal through the construction of a new set of locks, doubling the waterway’s capacity.

The existing locks allow the passage of vessels that can carry up to 5, 000 TEUs. After the expansion the Post-Panamax vessels will be able to transit through the Canal, with up to 13, 000/14, 000 TEUs.

The Expansion will double the Canal’s capacity, having a direct impact on economies of scale and international maritime trade.

The Program consists of several components:

The Panama Canal expansion is based on six years of research, which included more than 100 studies on the economic feasibility, market demand, environmental impact and other technical engineering aspects. Works on the Panama Canal Expansion began on September 2007 at a total cost of US$5.2 billion.

The activities will start early in the morning at the Agua Clara Locks, located at the Atlantic Ocean Colon Province local authorities, Panama Canal employees and the general public will be in attendance.

At 7:00 am, the vessel COSCO Shipping Panama (initially named Andronikos) from Chinese COSCO Shipping, will begin its transit across Panama. The historical moment will be broadcasted live.

After this celebration, the ship will start its first transit through the Panama Canal, arriving early in the afternoon to the Cocoli Locks, at the Pacific Ocean, where the Official Opening Ceremony will be held.

For the latest news in the form of press releases, viewers can log at the following links:

IBIA surveys members on transition to the 0.50% global sulphur caps