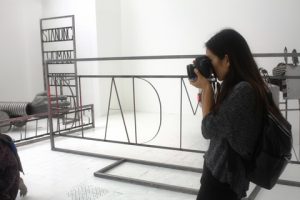 School is almost out at the Royal Academy of Arts in London. This heralds the RA Schools final year show for 2016, in which 17 graduates present sometimes startling works.

Among these emerging and semi-established artists is London-born Kira Freije, who with steel, aluminium and much else constructed a total of nine mostly weighty pieces, under the overall title A Rapid Succession of Noises That You Confuse For Danger.

All the exhibits, of which Kira’s is determinedly the most three-dimensional, are to be seen in solo spaces in the working studios of the RA Schools below stairs at the Royal Academy. 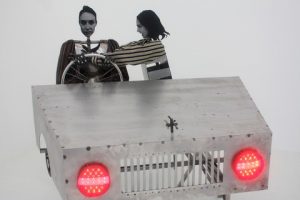 She Came in and Never Left, One Step from Death. A Meteorite without Fire. By Kirja Freije.

Her message seems to be one of society metaphorically playing with fire in its inter-personal relations. Kira rolls up her sleeves – she once apprenticed herself to a Sussex blacksmith to study metalworking techniques – and labels her craft with titles that scorch.

Before signing up for the three-year course at the RA Schools, Kira studied from 2008-11 at the Ruskin School of Drawing and Fine Art, Oxford University. In a 2012 solo exhibition it was said she “considers the comedy of commodified aspiration and the fetishism of youthful desire.”

Kira won prizes including the Chelsea Arts Club Trust Special Project Award and the Pirye Prize given by Oxford University Press, and has had a residency in Beijing.

Her large-scale, principally steel sculptures are among a wide variety of media including wax, copper, spray paint, concrete, natural sea sponge, Himalayan salt and acrylic used by the graduates in the exhibition. 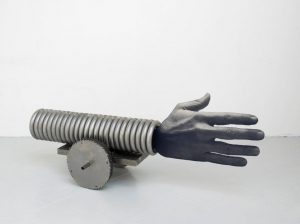 We Strike A Match At The Very Same Time To Signal Our Own Unique Unity. By Kira Freije.

While Kira’s mode of working is largely with traditional materials, needless to say some of her colleagues graduating from the UK’s longest established art school make the most in their works of the latest technology, and this is the case in relation to the exhibition as a whole.

The artists collaborated with the digital arts commissioning organisation Opening Times and the artist Paul Flannery on a project “to stage an intervention of artwork into the fabric of the RA website, ” say the organisers. “Visitors encounter the take-over by clicking a button where they will be able to explore the work of each of the 17 artists in the exhibition. The website will be animated with imagery and audio, becoming a work itself, and will be live for the duration of the exhibition.” 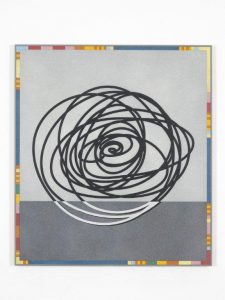 The RA Schools programme is tailor-made to the individual student, but is a cross-disciplinary course. It is described as “affording each artist the space and flexibility to develop work across the breadth of contemporary art media.” The School is said to offer the only free three-year postgraduate programme in Europe.

Brian Griffiths, senior lecturer and a creator of enormous sculptures such as cardboard reconstructions of computer workstations and items fashioned from second-hand finds, said: “This is an institution that values open discussion and critical debate; where difference and singularity can be celebrated and encouraged. In this environment, the final exhibition supports the artists to experiment with ideas and forms, to hope for new relationships and encounters.”

Currently headed by the Keeper of the Royal Academy, Eileen Cooper RA, the RA Schools have been an integral part of the institution since its foundation in 1768. It is the longest established art school in the UK. Distinguished past students include such masterly figures as JMW Turner, William Blake and John Constable. More recent alumni include John Hoyland, Anthony Caro, Paul Huxley, Matthew Darbyshire and Lynette Yiadom-Boakye. 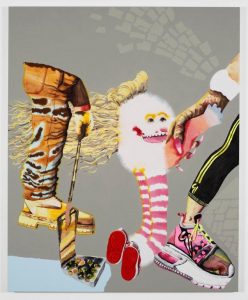 Many of the works exhibited are available for sale, to support the development of the students and the production of new work. The show coincides with the Royal Academy 248th Summer Exhibition which was founded to finance the training of young artists in the RA Schools and plays a significant part in raising funds to finance the students.

Building works underway at the Academy will include increased room and facilities for the students.

For the seventh year, the end-of-year show is sponsored by Newton Investment Management, a London-based subsidiary of the Bank of New York Mellon Corporation. It has assets under management of £47bn as at 31 December 2015.

Helena Morrissey, chief executive of Newton Investment Management, wrote in the show catalogue that her company values “the qualities which are at the heart of the RA Schools: diversity, creativity and the power of ideas to challenge the status quo and inspire innovation.”

Royal Academy Schools Show 2016 is open to the public at the complex off Piccadilly until July 3 2016. Hours are 10am – 6pm, except Fridays until 10pm. Access to the exhibition is via the Keeper’s House, to the right of the main Burlington House entrance. There is further information at www.royalacademy.org

Panama: Look who is coming!