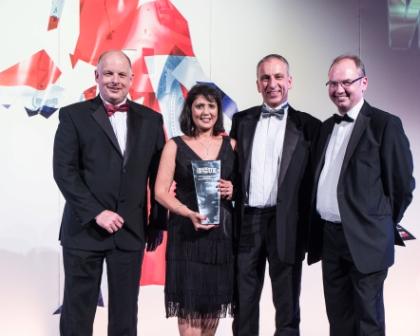 Fracino has scooped a high-profile national accolade for its innovation, creativity and speed in designing and supplying bespoke espresso machines for global fast food outlet SUBWAY®.

The UK’s only manufacturer of espresso machines won the Midlands title and beat off stiff  competition to clinch the Advanced Manufacturing Innovation/Creative Design Award category of Insider Media’s ‘Made in the UK Awards 2016’.

Compered by Giles Brandreth, the award ceremony was the culmination of the first week of the 2016 International Festival for Business: Manufacturing Week. The dynamic event saw Fracino recognised alongside UK and global manufacturers including Jaguar Land Rover, Nestle UK, and HydraForce.

Fracino’s SUB1, which is installed in hundreds of SUBWAY® outlets in the UK and Poland, also received a silver accolade in the Smart Product category of the manufacturer’s association, EEF, Future Manufacturing Awards earlier this year.

MD, Adrian Maxwell, said: “It’s tremendous to be acknowledged among the best UK and global manufacturers. This impressive honour reinforces our reputation for innovation and consistently delivering world class manufacturing standards. Our success is attributable to top teamwork as everyone has been instrumental in achieving our collective goals.

“We were also delighted to win the less formal accolade of ‘Giles Brandreth’s favourite company’ for creating the name Fracino by combining Frank and Cappuccino, after our founder – and my father – Frank Maxwell!”

The manufacturer is also a finalist in the New Frontiers category of the national Red Ribbon awards taking place at Wembly Stadium next month. Honouring the achievements of exceptional family businesses across the UK, Frank Maxwell is also up for the Lifetime Achievement Award.

Exporting to over 70 countries worldwide, the Birmingham-based business has also been nominated for the ‘Expert Export’ category of the SME awards.

The raft of achievements come on the back of Fracino investing £4m investment into new equipment and premises in recent years, producing 13 new machines since 2008 – and scooping 15 awards since 2013.

Celebrating its 50th anniversary in 2013, the family owned and run business is home to three generations of the Maxwell family. Founder Frank is the company’s chairman; his son Adrian is the MD, Adrian’s wife Marion is accounts director and their daughterRebecca is the service support manager. Adrian’s son David also works in the business during his university breaks.