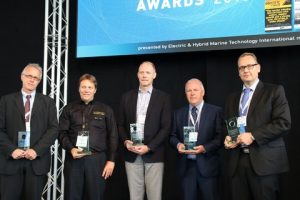 Beating off fierce competition from Feadship, Damen, Østensjø Rederi and the US Navy, Caledonian Maritime Assets won the coveted Electric & Hybrid Propulsion System of the Year award for a second time in three years, for its MV Catriona hybrid ro-ro passenger and vehicle ferry. Launched in December 2015, the US$17.7m diesel-electric vessel is able to carry 150 passengers and 23 cars, and performs 10 return crossings a day.

Two Saft Seanergy systems are at the heart of its diesel-electric hybrid propulsion system, providing a total of 800kWh of energy storage that powers the vessel in battery mode only and in hybrid mode in combination with a diesel generator. As a result, MV Catriona saves up to 30% in fuel compensation and CO2emissions, using just 500-600 litres of fuel a day instead of 700-800 litres of fuel as used by conventional diesel-electric propulsion systems.

In the Innovation of the Year category, Norsepower’s Rotor Sail solution clinched victory, with the judges impressed by its spinning cylinders that allow the main engines to be throttled back, saving fuel and reducing emissions while providing enough power to maintain speed and voyage time. It beat off fierce competition in the form of ABB’s Dynamic AC Electric power system, Akasol’s AKARack scalable lithium-ion energy storage solution, the Cell-Cool and Thermal-Stop energy management system by PBES, the Aziprop electric pod motor by Fischer Panda and the variable-speed genset by Hybrid Power Systems.

In the Propulsion System Manufacturer of the Year category,  Wärtsilä ended ABB’s two-year dominance by clinching the award for its sublime year, which saw a tie-up with Cavotec to jointly develop the world’s first combined induction charging and automotive mooring concept, the creation of a concept for a series of zero- and low-emissions hybrid shuttle ferries; and the supply of a complete electrical propulsion system to the Seabourn Encore and Seabourn Ovation cruise vessels. The category also saw nominations for ABB, Visedo Marine, Torqeedo, GE Power Conversion, Transfluid and Fischer Panda.

The Chief Engineer of the Year award went to Pieter Dijkstra, managing director of Visedo Marine, for spearheading the development, delivery and installation of the full drivetrain solution for the E-ferry project. The E-ferry has the largest battery capacity of any ferry in the world, and will be placed in service in June 2017 to transport vehicles and passengers between Ærø island and Denmark’s mainland. Dijkstra also oversaw the supply installation of the complete LNG-electric propulsion drivetrain for the Damen Eco-Liner inland vessel. The judges also noted that Dijkstra played a key role in the company’s acquisition of Dutch integrator and powertrain manufacturer Electric Power Conversion in January 2016.

John Thornton, editor of Electric & Hybrid Marine Technology International and co-chairman of the Electric & Hybrid Marine Awards, said, “It’s been another exceptional year for electric and hybrid marine technology, which has been echoed by the strength of this year’s nominees. It was certainly no easy task for the jury panel, and we’d like to congratulate all the winners and nominees for the quantity and quality of pioneering innovation produced over the past year.”

Brexit: next steps for out – how will this affect your business?