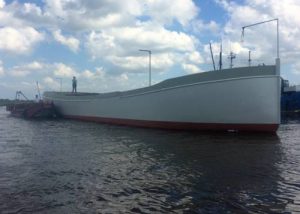 27 June 2016: This week, Maldon saw the arrival of Blue Mermaid, the first full size Thames Sailing Barge to be built since 1930.

The 87ft. steel barge, which will be based in Essex, has been built by local charity, Sea-Change Sailing Trust and will be used for their work with young people as well as carrying cargo. Sea-Change Sailing Trust works with disabled and disadvantaged young people as well as those challenged by traditional educational settings, experiencing social exclusion or at risk of offending.

The barge, which was built at the boatyard of C Toms and Son in Cornwall and later towed to her new home in Maldon, will now be fitted out and rigged by TS Rigging at Downs Road Boatyard. Blue Mermaid is a replica of a barge of the same name, which was sunk by a mine during World War ll with the loss of her crew. As a traditional Thames Sailing Barge, she will not have an engine and will be able to transport the equivalent of up to six articulated lorry loads in a low carbon environment.

Sea-Change Sailing Trust’s Chair of Trustees, Hilary Halajko commented,  ‘This marks a landmark moment in our ambitions to get a new Thames Sailing Barge into operation. Having already raised £450, 000, we now have £150, 000 left to raise to get the barge finished in the hope that ‘Blue Mermaid’ will enter service during 2017’.

Blue Mermaid can be viewed alongside at Hythe Quay in Maldon between Wednesday 6th and Friday 8th July.

Urgent warning for those expecting a ‘grace period’ on VGM