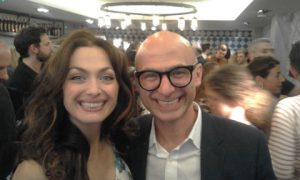 Its daybreak and I am still going through this …”thought for food” book following last night’s launching at The Real Greek restaurant in Soho’s Berwick Street.  I was there …John Faraclas with his camera and a little help from his friends, writes:

By now, all of you who know us in the shipping industry all over Planet Ocean, understand how sensitive and “spoiled” we are with good food, whether on board cargo ships or cruise ships and luxury yachts as, particularly on cruise ships, if you don’t like it your options are to… go overboard or never again join the cruise company and its vessels. Bear also in mind that many issues and disputes/ differences  arise on board ships when you don’t offer good food to the crew  – and mail on time as soon as you drop anchor… Some old masters were accompanied  by their own cooks with whom they have been at sea for a considerable time and who also did the …bit of PR with the authorities and charterers  – supported by chief stewards, particularly  when calling at foreign ports. Some also had their wives on board to offer this exceptional Greek… gastronomic service…  So now, you can fully understand how fussy we are with good food and everything that same entails… 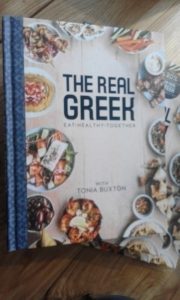 Moreover we are excited by the word “launching”, one of the greatest moments of your life is to watch, better say to physically participate in the launching of ships around the world’s shipyards and then continue with good food and appropriate drinks. So this launching of Tonia Buxton’s book really brought to my mind the excitement and being reminded twice, I managed not to miss it!

With the main room at The Real Greek restaurant bursting at its seams – who wasn’t there, and a unique weather prevailing atmosphere – the one you always have in the Grecian World, with trays being coming and going with all the specialities meticulouslyprepared and presented for the occasion and excellent drinks, particularly wines, the feelings and the spirits were on the right… and high mood.

Kostas Kyriakou and Tenia Patouni together with their teams produced a great show.  Emily Douglas, the spirit of Christos Karatzenis and Nabil Mankarious as well as all their colleagues and personnel did their best to entertain us not just in Grecian style appropriate for the event, but offered their hearts and souls to make the event unforgettable .

I counted over twenty different nationalities from as North as Sweden in Scandinavia down to Cape Town in South Africa; from as east as the entire Far East to the west  at the coastline of South America with whom I had interesting discussions based on Greek food! 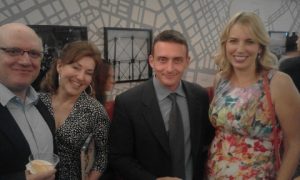 Photography was at its best; and did I hear you say: “selfies”??

The moment came when Tonia gave a short but to the point sentimental speech of thanks. It was very touching to hear her account of over three decades of marriage – and forthcoming anniversary, and her husband being present applauding!

I must also mention that her brother Christos Michaels, head of the Lee & Thompson legal practice specialising in media and entertainment matters, was present and indeed content for his sister’s unique success on this latest achievement, hence the main photo. 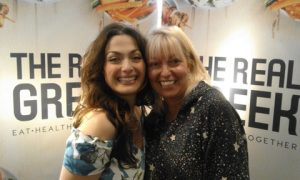 The Greek Consul General Sotirios Demestichas honoured the event, so did the Educational Counsellor of the Cypriot Embassy Dr. Achilleas Hadjikyriakou. The Greek Shipping fraternity in London was led by Commodore (Rt. HCG) Kostas Amarantidis and his wife Tenia  Koronaiou from the Shipping Office at the Greek Embassy. Good to meet the new Assistant Shipping Attache Lieutenant Commander  (HCG) Theofilos Mozas, George Economides from the Masticha World in London – proud to be a Chiot! Bianca Mudu, wife of Christos Michaels, Jasmine Harman, Eleanor Benson, Leigh Muftuoglou and many many others witnessed this very special launching! 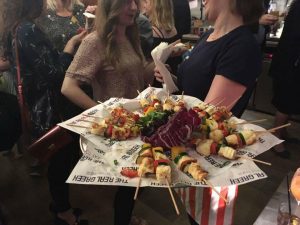 The Book divided in eight sections contains everything Tonia Buxton has to offer the world from tradition and empathy for Greece’s internationally-renowned cuisine! The Grecian World expanding as far as India in the East to Gibraltar in the West of Med – at the pillars of Hercules, from the Baltic Sea down to Erythrea at the Horn of Africa, offers unique recipes and local, may I say, patterns that all should know. The epicentre in the Eastern Mediterranean and Black Sea Regions cultivated,  besides the Classical Greek Civilization and its Business World, the great Cuisine which is a reality. Bravo to Tonia for offering this book to the world and wish her best. Present day Grecian World is more or less – by 65 percent mountainous, even the islands but its industrious people cultivating this difficult land made its blessed soil produce the best one can get. Mentioning the Grecian World its interesting t see how fillo pastry is “opened” say in Chios or in Cyprus and how same is used depending the occasion; valuing dolmades or yiaprakia  yet another aspect. Producers and Suppliers therefore as well as the climate play an important role  and this book is specific! Excellent! 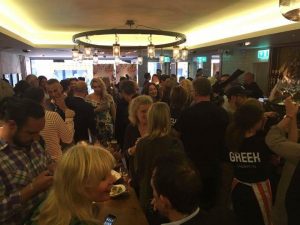 A view at the Real Greek; picture credits Tenia Koronaiou

Ensure you obtain this book and … see you soon at the Real Greek! This is an Hymnos (hymn) to the art of cuisine and gastronomic appreciation Greeks know best! The Real Greek for all Hellenes stands as the port from where the journey of discovery  begins when you experiment these new tastes emanating from century old traditions!

Romance and food is always in the air  and ensure you make the best out of this book. For those interested the book is published by Blink Publishing which is an imprint of the Bonnier Publishing Group.  www.blinkpublishing.co.uk

And remember: The Real Greek: Eat. Healthy. Together !