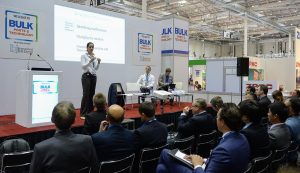 LONDON,  15.07.2016 – During the golden years for commodities, from 2005 to 2014, high demand and big profit margins pushed companies to produce more and more, sacrificing productivity for volume, and to invest in expensive projects, hoping to bring them to fruition fast enough to profit from the prevailing high prices. Much of that has now come to an end and the dry bulk sectors – from pit to port – must find new paths to an economically sustainable future, heard delegates at the Bulk Ports & Technology 2016 conference. Over two days in Hamburg during June, as part of the 41st TOC Europe Conference & Exhibition, stakeholders from the dry bulk commodities market, shipping and materials handling sectors came together to debate how to adapt to the tough new reality of low growth and low margins.

Giselle Dazzi, Port & Rail Technology and Innovation Specialist at Brazilian commodities conglomerate Vale, opened this year’s Bulk Ports & Technology conference at TOC Europe 2016 by reminding the audience that although commodity prices and margins are much lower than previously, volumes are still growing nonetheless.

The path (back) to profitability lies in three stages, argued Ms. Dazzi. The first is identifying inefficiencies – a process which lost ground over the previous ‘super-cycle’ of high demand and margins. This entails unlocking past knowledge of how the dry bulk industry achieved productivity gains before the boom, she said.

Secondly, “mindsets need to change”, asserted Ms. Dazzi. Behavioural change will be critical given that “many managers, frontline engineers and operations executives appointed to such positions during the super-cycle have never operated under a marginal environment”.

Finally, greater collaboration and innovation are needed. The mining industry spends very little on research and development for innovation compared to other sectors, especially on mining and processing methods. Greater collaboration is needed between miners and OEMs to achieve the levels of innovation required for long term success, said Ms. Dazzi. Reaching out to other disciplines would also be fruitful, for example with academia – research institutes, universities, etc. – and consultants.

The fall in global commodity prices has had a severe impact on dry bulk shipping, with collapsing freight rates compounded by an oversupply of tonnage. The dry bulk market could become profitable again in 2019 – but only if a series of extremely tough and sustained measures are taken by shipowners, year on year, Peter Sand, Chief Shipping Analyst at the Baltic International Maritime Council (BIMCO) told the audience at Bulk Ports & Technology.

Outlining BIMCO’s “Roadmap to Recovery in Dry Bulk Shipping”, Mr. Sand said that 2016 has to be the turning point in addressing the fundamental imbalance of the dry bulk market. The sector cannot expect any positive surprises from the slow-growing demand side, with growth possibly as little as 2 per cent a year for the foreseeable future. So shipowners need to step up to the mark and address the enormous overcapacity of ships – starting now and continuing over at least the next three years.

BIMCO has developed a “zero supply side growth” scenario that requires shipowners to neutralise the delivery of new ships every year by scrapping an equal amount of capacity from the existing fleet. This will stop supply side growth from 2017 onwards. It will not be easy, admitted, Mr. Sand, but it is imperative that the entire industry acts on this to avert even more years of loss-making freight rates.

There will also be bankruptcies and consolidation of fleets, he said. Successful owners of the future will operate large fleets with the size and scale to be able to adopt a risk management approach to chartering. They will plan to have sufficient ships deployed on longer term charters to ensure that the business has the cash flow to sustain it through future downturns.

Consolidation may, in turn, mean that the larger customers are able to fulfil the majority of their dry bulk shipping requirements from a small number of larger shipowners, making it much more difficult for smaller “asset play” owners to survive in the major dry bulk trades. The next three years will be a game changer, not only for dry bulk shipowners, but also the broader industry, he concluded.

A recent trend has been to deploy larger vessels in certain trade markets, something which is likely to continue in the coming years because of the opportunities for scale economies and changes in both commodity and shipping markets.

But of course this raises key questions for dry bulk terminals. Is the terminal ready to handle bigger vessels with the current terminal configuration and handling systems? If not, should it expand or redesign? What is the impact of various strategies on performance and cost?

At Bulk Ports & Technology 2016, Age Dijkstra and Dr. Mi-Rong Wu of simulation consultancy TBA outlined some of the options for terminals in coping with larger dry bulk vessels.

To evaluate analytically how larger vessels will influence terminal performance, simulation tools can be used to assess stochastic elements, such as vessel arrivals and operational stoppages. By simulating a whole year of vessel arrivals, said the TBA analysts, all the terminal KPIs can be determined in a detailed manner. In this way, the gain and trade-off from/between various investment and improvement strategies can be clearly compared.

To demonstrate, they outlined a case study with various scenarios for accommodating a Capesize vessel and the gains and trade-offs from deploying more ship unloaders, a separate quay or a longer quay.

For both existing and new dry bulk terminals any investment plans to accommodate larger vessels is based on total cost of ownership (TCO), they stated. But the essential point is that through simulation, terminals can base their investment decisions based on realistic outcomes of the options available.

Mr. Gomez updated the audience on work taking place to update IMO’s International Maritime Solid Bulk Cargoes Code (IMSBC Code) and the impact on the port industry. Over recent years, there have been a number of reported incidents – including some major ship casualties with fatalities – resulting from the potential for dry bulk cargoes to liquefy, he explained, mainly from very fine and wet products, such as Nickel and Iron Ore fines, on voyages from equatorial regions.

Following some years of research and lobbying, the requirement to test for and classify dry bulk cargo according to its potential to liquefy became mandatory under IMSBC from 1 January 2015. Industry, scientific community and regulatory bodies have worked together to develop a new test method, known as the Modified Proctor/Fagerberg Test, to be carried out in port before a cargo is loaded, which is more representative of the potential for a cargo to liquefy than previous approaches, he said.

The new test is now recognised as industry best practice, but is not yet compulsory under IMSBC. If the Modified Proctor/Fagerberg Test is adopted under the Code, added Mr. Gomez, “shippers, terminals and vessel masters will be able to directly comply with the IMSBC with the confidence of an approved and representative test for the cargo being transported.”

From 1 January 2016, the IMSBC Code also stipulates that cargo residues classified as hazardous to the marine environment (HME) should be discharged at port reception facilities and not at sea. But this has been a contentious development, said Mr. Gomez, and is due for further discussion at an upcoming meeting of IMO’s Marine and Environmental Protection (MEPC) Sub-Committee. If fully adopted, “ports will be required to provide access to discharge reception facilities for bulk cargo residues in the future.”

Shippers, terminal owners and operators, together with vessel owners and operators, are working with national and international regulatory authorities to improve the safety and environmental outcomes for the loading, unloading and transportation of cargoes, asserted Mr. Gomez. Ultimately, this should result in best management practice being adopted and regulated in the IMO IMSBC.

New revolving spreader technology is enabling shippers and ports to build efficient bulk handling systems around containers, allowing export supply chains to be set up at a fraction of the usual cost and giving standard container terminals the ability to diversify into bulk markets.

Cameron Hay, Chief Sales Officer at RAM Spreaders told delegates at Bulk Ports & Technology 2016 that the latest generation of containerised bulk handling (CBH) using the company’s “Revolver” spreader system eliminates the need for conveyors, shiploaders and storage sheds, greatly reducing the time and cost to develop a bulk handling operation. The system, which is designed for use with open top containers or specialised bulk containers, also eliminates dust and associated clean-up costs and is virtually man-less in terms of operation, he said, with loading rates of 1, 700 tph per crane.

Under CBH, materials are loaded into a specialised bulk or open top container at the mine or facility. The container is then sealed and transported by road, rail or inland waterway to the port, eliminating stockpiles and potential contamination of commodity. After storage at port, the contents of the container are discharged into the ship’s hold by the revolving spreader.

The global engineering firm has recently used the CBH technology on a $100 million project in Peru, designing a complete logistics system to move 1.5mt/yr of copper concentrate from Las Bambas mine near Cusco, 4, 300m above sea level, to Matarani Port for export. Incorporating a fleet of custom bulk containers and specialist revolving spreader equipment, the new system covers a 420km truck haul, Transfer Station, 310 km rail haul to the port and a container receiving and unloading system at Matarani, including conveying to a conventional bulk handling system.