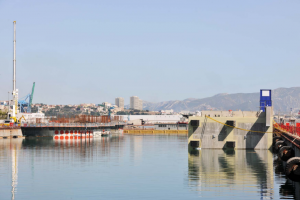 The two main construction projects in the Marseille harbour area of leading French port Marseille Fos are nearing completion following a decisive stage in works costing almost €64 million that will cater for mega-ships by enlarging the Passe Nord port entrance and recommissioning the giant No.10 drydock.

The drydock has been flooded for the first time since work started in January 2014 to enable flotation of a new 9, 100 tonne dock gate and three 4, 500 tonne caissons – under construction there since March – that will form the remodelled ends of sea walls guarding the harbour entrance.  The total of almost 23, 000 tonnes of concrete used in the various structures is three times the weight of the Eiffel Tower.

Currently 12 metres tall, the caissons are being towed to the Passe Nord site one by one in a phase lasting until October, when afloat construction taking them to a height of 22 metres is due to end.  The 15-metre diameter, 30-metre long units will then be sunk on to platforms 18 metres below sea level and injected with up to 10, 000 tonnes of concrete, with project completion scheduled by the year-end. 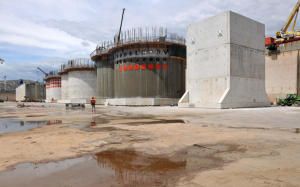 The Marseille Fos port authority approved the scheme in June 2012 and is contributing almost half the €32.7 million cost alongside State and regional funding.  The works will enlarge the entrance from 190 to 240 metres and also enhance turning space for the latest generation vessels.  Last year Marseille (excluding Fos) handled more than 170 vessels over 300 metres long and, in particular, is now braced for regular calls from cruiseships exceeding 360 metres such as Harmony of the Seas – the world’s largest – which called in June this year.

Renovation of drydock 10, third largest in the world after Lisbon and Dubai at 465 x 85 metres, was mainly inspired by the growing world fleet of mega-cruiseships – 65% of which operate in the Mediterranean – but will also provide a minimal-deviation repair and maintenance option for giant container, gas and bulk carriers as well as offshore platforms.

The drydock was built in 1975 as a supertanker facility but was mothballed in 2000 after the market shifted east.  The €31.1 million recommissioning initiative – with €14 million funded by the port authority – includes overhaul of the pumps and electrical network in addition to the new gate, which will be moored on site for fitting out and testing when the dock is handed over to operator Chantier Naval Marseille (CNM) in September.    During this period the original gate, currently being renovated, will be in place.  The first customer is expected by the end of the year.  CNM has operated two other large drydocks at Marseille since 2010 – No.8 (320 x 50 metres) and No.9 (250 x 37 metres).  Drydock 10 brings a massive new dimension to the repair base with a capacity of 480, 000m3 of water – equivalent to 192 Olympic swimming pools – that can be emptied in 3.5 hours at a rate of 40m3 per second.