ABP announces City of Culture partnership at gateway to Europe 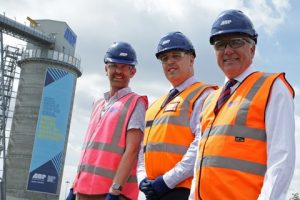 Associated British Ports (ABP) Humber and Hull UK City of Culture 2017 (Hull 2017) have announced a major new partnership that will help spread the word about City of Culture to a home and international audience.

The announcement focussed on the unveiling of a supersized banner at the Port of Hull.

The 29mx8m banner is secured to a 49m-high storage silo, visible from ABP’s eastern Hedon Road approach to its passenger and trade ferry terminals.

This will be followed by the installation of complementary large hoardings and lamp-post banners in Northern Gateway, visible to more than one million passengers per year.

All those using the port’s popular routes between Hull and Rotterdam in the Netherlands, or Hull and Zeebrugge in Belgium, will travel past the signage en route to and from the ferry terminal on the river. It will be installed in the coming months.

Simon Bird, ABP director Humber, said: “ABP first became involved with Hull 2017 almost three years ago when it supported the city’s bid as one of the Bid Angels. Since then we’ve been working with the City of Culture team to assist them in their endeavours in helping the city achieve its full cultural potential.

“We’re very much looking forward to seeing what 2017 brings and we’re enormously proud to confirm our status as a major partner.”

Martin Green, CEO and director at Hull 2017, said: “We are delighted to welcome ABP on board as a major UK City of Culture partner. We look forward to working with all at ABP’s pioneering Port of Hull, a long-established gateway to Europe, to help raise the international profile of the year of world-class arts and culture that lies ahead.”

ABP has approximately 950 members of staff working across its four Humber ports of Hull, Goole, Grimsby and Immingham. In addition to the one million passengers who travel through the port each year, the Port of Hull is also a specialist trade port and the focus of the Humber region’s rapidly expanding renewable energy hub, spearheaded by the Green Port Hull development on Alexandra Dock.

About ABP
ABP is the UK’s leading ports operator with 21 ports and other transport related businesses creating a unique national network capable of handling a vast array of cargo.
Around one quarter of the UK’s seaborne trade passes through ABP’s Statutory Harbour Areas.
ABP contributes £5.6 billion to the UK economy every year and supports 84, 000 jobs. Our current investment programme promises to deliver an extra £1.75 billion for the economy every year.
ABP…
• Handled over 1.6 million vehicles in 2014.
• Generates around one quarter of the UK’s rail freight
• Has 1.4 million square metres of covered storage
• Has 1000 hectares of open storage
• Handled 94.5m tonnes of cargo in 2014
• Owns 5000 hectares of port estate
• Has 87km of quay

ABP Humber
The four ports of Grimsby, Immingham, Hull and Goole handle more than 61 million tonnes of cargo between them each year.
Grimsby and Immingham form the UK’s busiest trading gateway and move around 50 million tonnes of cargo per annum.
£130-plus million is currently being invested in the biomass handling terminal in Immingham, in a Humber-wide agreement with Drax Power Ltd that has seen £25 million invested in a biomass handling facility in Hull. The Immingham Renewable Fuels Terminal handles sustainable biomass shipments and will create over 100 permanent jobs once complete. The construction phase created 100 employment opportunities.
The Port of Hull handles 10 million tonnes of cargo per annum and is the is the focal point for the development of the UK’s largest offshore wind turbine manufacturing, construction, assembly, and service facility, which will be located on the Port’s Alexandra Dock. This new facility represents a £310 million investment and will create up to 1000 direct jobs.
The Grimsby River Terminal represents an investment of £26 million and allows large car-carrying ships to berth outside the Port’s lock system. This development confirms the Port’s position as the UK’s leading automotive handling facility.
More than the equivalent of 1million teus (twenty foot equivalent unit) of unitised trade is shipped through ABP Humber ports.
Goole is situated 50 miles upriver and is the UK’s premier inland port. It handles over one million tonnes of cargo annually.

About Hull UK City of Culture 2017
Hull secured the title of UK City of Culture 2017 in November 2013. Hull is only the second city to hold the title, and the first in England. The vision of the Hull 2017 Culture Company, the delivery organisation of the project, is “to deliver 365 days of transformative culture in 2017 through a range of diverse and high-profile events and projects”. Following on from the Olympics and Paralympics, Commonwealth Games and the Tour de France in Yorkshire, Hull 2017 is the next major event in the nation’s cultural calendar.

A warning on BDI’s downfall and explosive geopolitics…