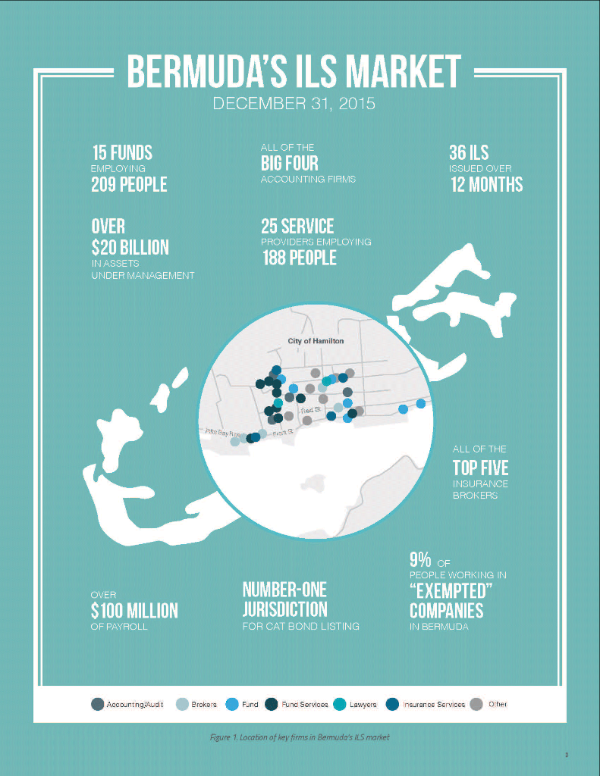 Hamilton, Bermuda, July 21, 2016—Bermuda’s convergence and insurance-linked securities industry generated at least 400 jobs in the jurisdiction by the end of 2015, representing a 30-percent increase over the previous year, a new economic impact study commissioned by the Bermuda Business Development Agency (BDA) has found.
The research report, titled “Leading the Way: Bermuda’s ILS Market 2016, ” also found the fast-evolving industry sphere was responsible for more than $100 million in payroll, with those employed in the sector representing nine percent of all people working in the island’s globally operating companies last year. Jobs included 209 people employed by 15 funds, coupled with 188 jobs at 25 companies supporting the ILS industry directly, including all Big Four accounting firms and all top five insurance brokers. Overall, the study estimated a total economic impact of $734 million from Bermuda-based insurance-linked funds.

“We commissioned this research to provide details on the economic impact of the ILS market on Bermuda—both actual jobs created and aggregate fiscal contribution, ” said BDA CEO Ross Webber. “The results of the study are certainly positive, proving the convergence sector has quickly become a pivotal and multiplying contributor to Bermuda’s overall economic health. The study is not exhaustive, so data gleaned presents a picture of the minimum contribution.”

Bermuda has the world’s largest share of cat bond listings, with more than $20 billion in assets under management, or three-quarters of global capacity, according to the report, confirming current statistics from the Bermuda Monetary Authority (BMA). “The majority of ILS assets are managed by specialist insurance-linked fund managers, ” the report noted. “These firms operate at the intersection of the reinsurance and investment industries and employ people with both types of experience.”

Notably, before 2009 there were no insurance-linked securities domiciled in Bermuda. “That year, in a move exemplary of the collaboration between government, industry and regulator, Bermuda introduced legislation allowing the creation of Special Purpose Insurers—specifically designed to attract ILS and collateralised insurance companies to the island. “Since then, Bermuda has become the market leader and the recognised hub for this sort of innovation and product development, ” said Webber.

InsuranceLinked.com carried out the study, with Bermuda-based Acumen Group. “We were extremely pleased to be asked to run the first, comprehensive study of Bermuda’s ILS market, ” said InsuranceLinked Principal Adam Alvarez. “The findings confirmed our hypothesis that Bermuda is the world’s number-one choice for ILS fund managers and service providers. We also found Bermuda is continuing to win the war on talent. This continued inflow of new expertise will ensure Bermuda leads the way for the global ILS market for many years to come.”

Key findings of the study included:

“Bermuda’s ILS sector has always been highly collaborative, bringing together our regulator with industry both here and overseas with a focus on making the jurisdiction a centre of excellence for creation of ILS structures and servicing and listing of transactions, ” said Greg Wojciechowski, Bermuda Stock Exchange (BSX) CEO and head of ILS Bermuda, which produces the annual ILS Convergence event in Bermuda every November, with BDA as lead sponsor.

“This report crystallises the success of those efforts and illustrates Bermuda’s strengths, its innovative nature and importance to domestic and global clients, ” said Wojciechowski. “The data directly reflects the work that’s been done to provide an efficient and sophisticated commercial platform for products and services in the convergence space. It says a lot about Bermuda’s capability as a jurisdiction and underscores the unique set of variables that must be present and have come together in Bermuda to support this evolutionary force in the reinsurance sector.”

Breaking down the convergence sector, the study identified three key pillars: insurance-linked fund managers and funds; insurance-linked assets; and service providers that work with both. Twenty-four ILS companies of a total 34 registered in the jurisdiction participated in the study, representing each of the main subsectors. Polled on the future of the global ILS market, participants were confident, identifying the biggest opportunity as new products that could be accessed by ILS funds. Respondents were also optimistic about Bermuda’s ILS market, ranking it first among jurisdictions, followed by London and Zurich in joint second place.

“We were excited to work with the BDA and InsuranceLinked to prepare this report on the current state of Bermuda’s ILS market, ” said Acumen Managing Director Richard Hartley. “The report demonstrates what an important part of the economy the ILS market has become to Bermuda in a relatively short space of time.”

The study was discussed during the BDA’s annual ILS strategy session with key stakeholders last fall. “We then developed a plan to measure the economic impact of this innovative asset class, ” said Jereme Ramsay, BDA Business Development Manager. “The findings provide a benchmark to track Bermuda’s performance, compare against competing jurisdictions, and also market the sector and its impressive intellectual capital. We’d like to thank our industry group that met last fall, and the wider ILS community who participated in the study.”

The study can be accessed here: http://bit.ly/29R5cPV

ABP announces City of Culture partnership at gateway to Europe