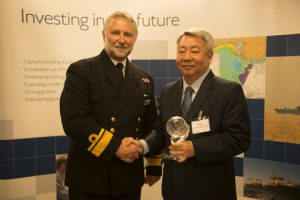 The United Kingdom Hydrographic Office (UKHO), the world-leading provider of hydrographic and geospatial data, has awarded the 2016 Alexander Dalrymple Award to Dr Parry Oei, Director (Port Services) and Chief Hydrographer at the Maritime and Port Authority of Singapore (MPA).

The Alexander Dalrymple Award, established in 2006 and named in honour of the first Hydrographer of the Royal Navy in 1795, is presented by the UKHO in recognition of an outstanding contribution to world hydrography. It is awarded to coincide with the celebrations of World Hydrography Day, a United Nations-endorsed recognition of the vital role of hydrography in supporting safe navigation and sustainable use of the world’s seas, oceans and waterways.

Singapore is one of the world’s busiest ports and plays a vital role in world trade as a global shipping hub and maritime gateway to Asia. Dr Parry Oei has served as Singapore’s Chief Hydrographer since 2004 and has been a key international figure in the promotion and development of Electronic Navigational Charts in Asia.

The 2016 Alexander Dalrymple Award was presented to Dr Oei by John Humphrey, Chief Executive of the UKHO, at a World Hydrography Day Reception held at the International Maritime Organization in London. Mr Humphrey said:

“Dr Parry Oei has made a tireless contribution to the International Hydrographic Community, particularly his leadership in delivering the first Singapore Electronic Navigational Charts, as well as his guidance within the East Asia Hydrographic Commission’s capacity building initiatives and the tripartite Marine Electronic Highway Working Group in the Straits of Malacca and Singapore. Dr Oei has made a difference to hydrography in East Asia, he is currently making a difference with his work as chairman of the International Hydrographic Organisation’s Inter-Regional Coordination Committee and he is a very worthy recipient of the Alexander Dalrymple Award.”

“It is fitting that we present this award at the UK’s World Hydrography Day celebration, as we seek to raise awareness of hydrography and the importance of the seas and waterways to everyone’s lives. We should also remember the important work of the IMO on the implementation of the mandatory carriage of ECDIS. The use of ENCs has steadily increased year-by-year and as of May 2016, 51% of all vessels that are subject to the SOLAS regulations on the mandatory carriage of ECDIS, including those that do not trade internationally, are now fully ECDIS ready.”

“This year’s theme for World Hydrography Day is ‘Hydrography – the key to well managed seas and waterways’. This is intended to focus attention on the importance of our knowledge of the shape, nature and depth of the seafloor as a fundamental requirement for the proper, safe, sustainable and cost effective use of the world’s seas, oceans and waterways.”

“With so much of the world’s oceans and waterways still to survey and chart to modern standards our theme allows us to highlight and encourage innovative supplementary data gathering initiatives to help obtain better and more useful data, such as depths in areas where coverage is sparse.”

“For me and my fellow National Hydrographers, one of our key aims is to do our very best to keep Mariners safe at sea, providing accurate and authoritative data such that the Mariner can make well informed decisions. The UKHO will continue to play an active role in international efforts to achieve this aim, something that can only be achieved by working together with our partners around the world, through the leadership of the International Hydrographic Organization.”