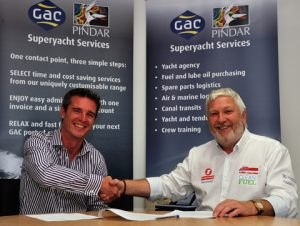 Southampton, UK, 22 July 2016 – As Team Britannia prepares for its bid to break the round-the-world powerboat record later this year, GAC has been named their official shipping and logistics partner.

GAC will draw on the local contacts and expertise of its network of global offices and partners to provide the 80ft powerboat and its 12 strong crew with all the food, fuel and stores needed to complete the 23, 000 mile voyage. The first-hand experience of the Group’s yachting and marine leisure experts at GAC Pindar Superyacht Services will also come into play for meeting the specific needs of the boat during its voyage.

Alan Priddy says: “This partnership with GAC, one of the leading and most respected global providers of shipping and logistics services, will help us smash the world powerboat record. With over 9, 000 people at more than 300 offices in 50 different countries they have the capacity and experience to make sure that when we enter a port, transit the Panama or Suez Canals, or load fuel and other stores, there is no delay. Every minute waiting with the engines idle is wasted time.

“The key to success is about having the right people involved. This particular challenge is as tough as they come – it has only been tried three times before and is at the pinnacle of endurance motorsport. That is why I am so pleased to have assembled a crack team, from the designers, boatbuilders, crew and GAC. They will all play a vital part in our success in breaking the current record held by Kiwi Pete Bethune, just shy of 61 days.”

Murray Bishop adds: “Supporting Team Britannia in their world record attempt is a natural fit for us. We will draw on the GAC Group’s network, resources and expertise to support their boat along the way, providing port agency, canal transit assistance, fuel supplies, crew travel management and logistical support. We look forward to helping Team Britannia reduce their time in port wherever possible to help them in their bid to set a new record.”

The news of the partnership comes less than 100 days before Team Britannia starts its world record attempt. The boat is under construction and will be launched in September for two weeks of sea trials, which will include sailing round Britain and from London to Monaco, arriving in time for the famous boat show. After the Monaco Boat Show, the boat will travel to Gibraltar, for its final sea trials, at which point it will be stripped of all luxury items. Team Britannia will set off on their world record attempt from the famous racing mark at Europa Point on 23 October, after a week-long nautically themed festival in Gibraltar.

To complete the record attempt the boat must pass through the Suez and Panama Canals, cross the Tropic of Cancer and the Equator and start and finish in the same place. Team Britannia will start in Gibraltar and call at Puerto Rico, Manzanillo, Honolulu, Guam, Singapore, Oman and Malta to take on fuel.