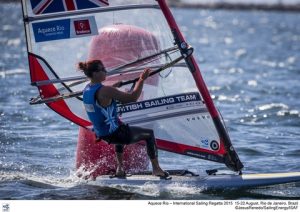 Bryony Shaw at the 2015 Test Event

Rio 2016 will welcome Spain’s Marina Alabau back into the Olympic fold as she aims to defend the Women’s Windsurfer (RS:X) title she won at London 2012.

Alabau will be part of a 26 strong fleet that starts racing at 13:10 on Monday 8 August at the Rio 2016 Olympic Games and as defending champion, will be considered one of the favourites. Even with this tag, does Alabau feel any pressure? “Not at all, not at all, ” expressed the Spaniard.

“I feel more relaxed than four years ago. Four years ago I was quite stressed as I knew I could get a medal; it was my dream. Now I’ve done it, I have my gold and there’s nothing better than that so I’m going to enjoy the Olympic experience.

Charline Picon at the 2015 Test Event

“Of course I want another medal but I feel no pressure, I’m one of the favourites but there are eight other favourites and just three medals.”

LEARN more about the RS:X and Women’s Windsurfing history.

“Charline [Picon (FRA)] is one of the main rivals because she’s showed that over the first two years of the campaign she was three steps ahead of everybody. Slowly we have been catching her but also, Bryony Shaw (GBR) is a favourite.

“I know I can beat them; I know they are really good but sometimes I have my good moments as well. The Olympic Games is always a different event. I’ve already won it so I know how to do it. I think that’s why Charline and Bryony are so good, because they have the experience. There are some good young girls but they don’t have the experience. 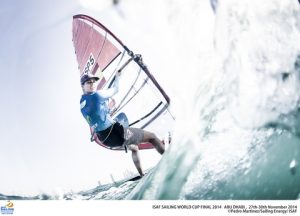 “Definitely, for me, Charline and Bryony are my rivals.”

France’s Picon has dominated on the Rio Olympic waters winning the 2014 and 2015 Olympic Test Events in a convincing manner. Sailing’s Olympic Test Event often acts as an indicator as to who the medallists at the main event will be. Eighteen of the 30 medallists at the London 2012 test event went on to claim a medal and Picon will certainly be in the driving seat to continue the trend.

Throughout 2016 the French sailor has tailored her preparations and will come into the Olympic Games as European Champion following victory in Helsinki, Finland earlier this month.

For Great Britain’s Shaw, she will enter Rio 2016 as World #1 in the Women’s RS:X after sustained excellence over the last 12-months and beyond. Shaw has three World Championship silver medals over the Rio 2016 quadrennial so knows what it takes to mix it up at the front. She also knows how to deliver in tough competitions, winning gold at the Sailing World Cup Final in 2015 as well as Sailing World Cup Miami at the turn of 2016.

Both Picon and Shaw have the Olympic experience that will allow them to focus on the task at hand. Shaw won bronze at Beijing 2008 and finished seventh at London 2012 with Picon a place behind.

Both sailors have had a full on campaign for Rio 2016 but for the defending champion, Alabau, it’s been quite the contrary.

“This campaign I have been a mum, ” explained Alabau. “Everything has changed this time round. I had one year out with pregnancy and the second year I didn’t travel or compete much but it was a good year with a second in the Europeans and second in the worlds.

Parenthood and Olympic campaigning is a delicate balancing act but it seems to be one that Alabau has mastered, simply by looking at her Instagram account – Instagram.com/marinalabau – where her daughter, Marta, makes regular appearances enjoying the beach life her mother and father loves.

But in the meantime, Alabau is finalising her Olympic preparations to be ready for the first Women’s RS:X starting gun that will be sounded at 13:10 on the Pão de Açucar racing area on Monday 8 August.