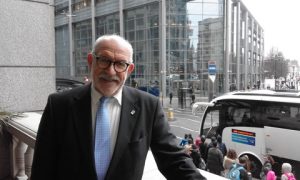 With minus 17 points the BDI (Baltic Dry Index) ended the day and with the current uncertain geopolitics things are getting more than sour. John Faraclas’ midweek recap:

At 679 points the BDI, unless the slippage is prolonged – might go below the 600 points and then it is entirely up to your reserves to continue your 4A’s both at sea as well as in the stock exchanges…

The Capers, the ultra-volatile size saw its BCI 2014 lost today 38 points approaching the 800 barrier and about to fall below, standing at 803 points.

Similarly the Panamaxes lost 32 points with the BPI at 752 points; tough for both sizes and its hundreds of owns and coupon holders at the stock markets were most of this tonnage is listed…

Just six points was the Supras’ BSI lost points which now stands at 684..

So what’s the remedy the gurus advise at least for the “easy” dry sector?

The Wets too where not that rosy; the last published BDTI and BCTI stood at 567 (minus 12) and 462 (plus one) points respectively.

The Geopolitical front is completely influenced by the Migrants yet again:

We all know how Turkey behaves and doesn’t keep an iota of its obligations and agreements with the EU, don’t mention its behaviour to all its neighbours. There is another influx from the Turkish Anatolian Coast to the Greek Islands, mainly Lesvos and Chios, raising not only eyebrows, but major concerns.  Yesterday 100 landed in Chios just after midnight in the islands main port – an inflatable boat 52 and at Gridia beach 48. $o landed at Cape Korakas in north east Lesvos. Nil… migrants arrived in Samos…  Things are getting worse following the “abortive” “coup” there… Excuses excuses excuses form the official Turkish state which continues to blackmail Europe and in particular the European Union. I guess it is about time all nations to say: “Enough” to Erdogan’s faithful.- Tomorrow there is going to be a joint meeting / forum of Greece’s two bodies; that of the Governmental Committee of Economic Policy and that of the Governmental Committee of Social Policy to look after the Islands Policy and other relevant issues. A must for these bodies is to produce results both in tackling Migrants as well as saving the islands from fires which destroy not only their economy but also the social cohesion. Needless to say a plan to revive the local economies! Greece is NIT just the mainland, its don’t forget an Islands Nation! We will revert on these issues as everybody had enough given the fires a few hours ago which burned many forests and mastiha bushes on Chios. In the middle of the summer you never ever know how people (locals) can react as they had enough.

All in all, the European Union MUST put a curb on Turkey here and now; who’s afraid of the Turks Mr. Junker?

Terrorism one again marred the Mighty Continent and what comes out from the despicable massacre in France yesterday, is simply awful. Time to act like stealth here and now. Time to step up controls and checks not only in the borders of the European Union – internal and external, but everywhere. ISIS is here to make it a mess. We must respond with a pre-emptive policy style.

BREXIT might attract many followers in the EU; you bet! GREXIT as we have said it might happen at any time. I guess the United Kingdom under Mrs. May will for sure proceed with the most appropriate efficiency to safeguard the United Kingdom’s vested interested worldwide!

London has been the Administrative Capital of Shipping for many decades and the World’s premier Shipping centre for over 300 years. You like it or not, London calls the shots. Just wait and see the way this government and the Mayor of London (both the Metropolitan one as well as the Lord Mayor of London) will proceed and further develop the City of Father Thames!

In Greece the Greek Parliament should only look after one issue if they believe in Democracy: “Proportional representation, Voting from 18 (eighteen), One candidate per party per constituency; reduction of the number MP’s down to 200 (from 300). Shall we go a bit further: Greece needs a team of 25 ministers, 25 deputy ministers and 25 General Secretaries  for ten years to put the house in order! End of the story; the rest is simply per my favourite American expression: Bullshit! ” Read again our top article here and if you prefer it this way, Nemesis awaits for you… That applies for Greek politicians and their cronies as well as the European ones who continue with German backing blessed by Brussels to strangulate the Greek people – others turn will soon come!

Reverting later with an update.

Crédit Mutuel de Bretagne back in the game