Sweet, sentimental melodies weave through the air, the voice emanating from inside one of the wooden, pastel-hued buildings in a charming village on the Finland shore of the Gulf of Bothnia.

The popular singer Sini Tuomisalo is dedicating a recital to an audience of friends and acquaintances in her studio: crooning gentle classics by Finnish composers active from the 1930s to more recent times. On this occasion, in honour of visitors from London, she is using English translations of the lyrics. This multi-talented lady accompanies herself on piano, organ and accordion. 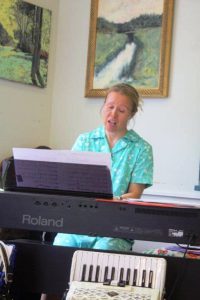 Sini accompanies herself on keyboard…

Sini’s base for her international career is this small village, Reposaari, which was once an important fishing port and is now chiefly a restful summer destination within reach of long sandy beaches. While at home, she gives occasional concerts in her nearby studio for small groups, and this afternoon her performance as always goes down well, as do delicious home-made cakes, coffee and tea offered by her supportive mother and father.

It has been a busy summer for Sini. She starred in 10 performances of comedy theatre (she has an armoury of cute facial expressions that are irresistible); played organ in church; is preparing for an autumn television appearance; and rehearsing for a concert with one of Finland’s top accordionists, Vesa Formunen.  She had a 20-minute solo stand-up spot in the nearby city of Pori during its famed annual jazz festival. That last event, organised by the Finnish-Russian Friendship Association, offered a view of relations between Finland and Russia and was televised by Yle Areena, Finnish TV online.  “This year has been truly very hectic,” she says.

A singer, actor, author of a witty but instructive book on diet, and another book of her experiences of living and studying in St. Petersburg and painter of landscapes and many other genres, Sini is inexhaustible in her accomplishments, and her concerts are musical history tours because she regales her listeners with the back-stories of all the songs and their composers. 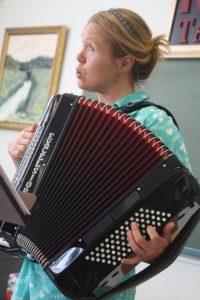 … and on accordion, at her studio recital.

People assembling for the latest such concert were talking too about a snippet of exciting local news: a record number in one go of overseas visitors had descended on the district, specifically the 450 passengers from the Maltese-flag cruise ship 18,600 gt Saga Pearl II, which had berthed at nearby Mäntyluoto harbour, which is administered by the Port of Pori. The ship had left Dover on June 19, and the rare call at Mäntyluoto was part of a 15-day tour of Scandinavian and other northern European points.

The tourists were shown the attractions of the region, including the late-19th and early-20th century wooden architecture of Reposaari, the heritage and residential site at Noormarkku of Ahlström ironworks which were founded by Finnish ship owner Antti Ahlström who lived from 1827 to 1896, and the beach resort of Yyteri.

Reposaari is an island connected by causeway to the mainland, and in terms of the natural environment, is known for its ‘ballast plants.’ These are exotic plants which sprouted when ballast sand from the old sailing ships was tipped ashore. It is said that more than 70 exotic plant species now flourish at Reposaari. A man-made attraction is the village’s tallest building, an imposing hexagonal wooden church built in 1876 in Norwegian style.

The port of Pori, incidentally, describes itself as “the most energetic Nordic port… we can do anything!” and it boasts one of the deepest fairways in Finland at 15.3 m. The river Kokemäenjoki links the city of Pori’s splendid esplanade with Reposaari. 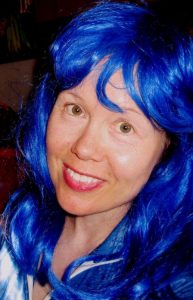 Sini in one of her comedy roles.

There was reference to the singer Eila Pellinen (1938-77) whose biggest hit was Onni jonka annoin pois (The happiness I gave away); and to the 1986 Eurovision entry Päivä kahden ihmisen (Never the end) written by Kari Kuivalainen.

Sadly, one of Sini’s respected musical heroes, Lasse Mårtenson, passed away on May 14 2016, and there was a tribute to that singer, composer, actor and theatre director, who was born in Helsinki in 1934.

Lasse Mårtenson performed in the Eurovision Song Contest in 1964 with the entry Laiskotellen (Idling), and came seventh. He is known in his home country as the composer of the tune Myrskyluodon Maija (Maja of Storm Island) which has been recorded by among other performers opera diva Karita Mattila; and Kaikki paitsi purjehdus on turhaa (Everything except sailing is unnecessary).

Sini said she had recently been in touch with another leading composer, Toni Edelmann, who was born in Hamina, near Finland’s largest port, Kotka. Unfortunately, she said, he had been unwell for a time. 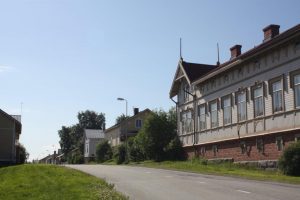 On one of her CDs, Sini has included four Edelmann songs: Cry my city, cry; On the way home; Longing for something – youth, home; and An autumn day.

That same CD features Finnish religious songs, Finnish folk songs, a Russian folk song, a Ukrainian folk song in Finnish and Ukrainian versions, and a song written by a medical doctor friend, The Other End of the Rainbow.

On the album, Sini played piano and organ, Vesa Formunen played accordion on some tracks, and another friend took on contrabass. The virtuoso Vesa is the artistic director of a regional accordionists’ association. Reflecting the maritime history of Reposaari, another of Sini’s albums contains ballads of the sea, both traditional ditties and some she composed.

As if all the activities already on the calendar were not enough, Sini is compiling recordings for another album which will revel in a good share of nostalgia. Expected to be released before the close of 2016, it will be based on material from an earlier sold-out disk and feature extra songs, taking the total to around 80 minutes.

The return of the Radial medallists