Onsite evaluation of the Heraklion Port

The three-day event started with a technical workshop and on-site survey of Heraklion Port area, assessing the prospects for developing LNG bunkering installations within the port. During the workshop 35 participants actively contributed to open group discussions on the operability issues surrounding LNG bunkering, technology, safety provisions and regulations. A fuel calculation review of LNG fuel requirements for one currently operating type of fast ferry on the Crete-Cyclades route was also estimated. Additionally, significant issues on LNG supply chain were critically evaluated, taking into account the potential for the wider use of natural gas in other sectors. Possible site positions for the small-scale LNG installations were proposed and discussed during the workshop. 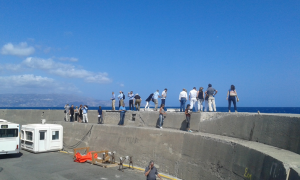 Another view from the onsite evaluation

“LNG is one of the cleanest burning fossil fuels. It is factually proven the most safe and technologically mature green marine fuel. Over 50 ports globally have planned the development of LNG bunkering infrastructure”, highlighted Thanos Koliopulos, LR Global Special Projects Manager, who chaired the workshop.

A list of areas for further action and assessment was developed and this is to be further detailed by the project partners.

Day 3 (22nd July) was dedicated to raise awareness about the Poseidon Med II project and its objectives to local community and stakeholders from the industrial, academic and business sector. During the event, hosted by Heraklion Port Authority at Heraklion Chamber of Commerce & Industry, the project representatives from the Public Gas Corporation (DEPA), the Hellenic Gas Transmission System Operator (DESFA), Lloyd’s Register, Rogan Associates, the Centre of Research & Technology Hellas and three participating ports (Igoumenitsa, Piraeus, Venice) presented the scope and aspects of the project, giving emphasis to the importance of the use of LNG as marine fuel for the island of Crete. 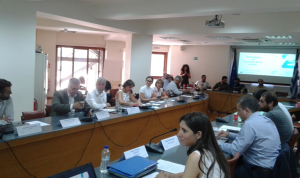 “The Management of Heraklion Port Authority strongly supports ecofriendly initiatives and actions. Our mission is the Port of Heraklion truly becomes a “green” port, protecting the environment, improving day by day its environmental footprint. In this context, we participate in the European project Poseidon Med II which aims to bring about the wide adoption of LNG as alternative fuel for shipping. For this purpose, the port undertakes relevant technical studies for the preparation and establishment of LNG unit for storage and bunkering operations. This project will hopefully lead the Port of Heraklion to a new energy status with obvious positive impact on new ships attraction, on the local economy and on the general operations of the port”, noted Apollon Filippis, Chairman & Managing Director of Heraklion Port Authirity S.A.

George Polychroniou, Project Manager of Poseidon Med II- Executive Director, Strategy, Development, Administration & IT, of Public Gas Corporation of Greece (DEPA) highlighted: “Port of Heraklion is going to play an important role in the introduction of LNG as marine fuel in the East Mediterranean. LNG provides significant environmental benefits compared to the alternative fuels, in term of reducing emissions. Furthermore, the establishment of small scale LNG infrastructure at ports gives the opportunity to the wider use of natural gas in other sectors”.

Parallel to the workshops, meetings were occurred between the Prefecture of Crete, the Municipality of Heraklion and project representatives.