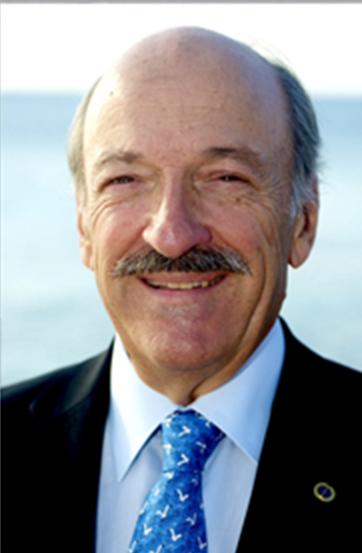 August 1, 2016 – Joe Hughes, Chairman of the North American Marine Environment Protection Association (NAMEPA), announced that Nicky Pappadakis has been unanimously selected to receive NAMEPA’s 2016 Lifetime Award. He began his career in 1961 with the family firm A.G. Pappadakis & Co. in London, England. “Mr. Pappadakis has dedicated his life to the shipping industry and demonstrated his commitment for the sea, seafarers, safety and the environment”, said Joe Hughes.

“My acceptance is in the name of all who care about the environment and who “try to help make a difference”, said Mr. Pappadakis. “My support and belief in NAMEPA is simply because of the influence my meeting Capt. Jacques-Yves Cousteau had on me in 1974. Our family history with HELMEPA contributed to my immediately recognizing the potential enormous positive impact that NAMEPA could have for the environment. My support was because of conviction and not convenience.”

“Mr. Pappadakis’ multiple achievements and contributions to the maritime industry are profound and well documented. What is less recognized are the generous and invaluable gifts he has given to ensuring NAMEPA’s success”, said Carleen Lyden-Kluss, Co-Founder and Executive Director of North American Marine Environment Protection Association (NAMEPA).

The NAMEPA Marine Environment Protection Awards are given in recognition of an individual or organization’s efforts on behalf of preserving the marine environment as exemplified by a commitment to a program which has specific objectives set for environmental performance and improvement, and which is innovative and goes beyond minimum environmental compliance. Eligible candidates include members of the commercial maritime industry, government agencies, educational organizations, associations and individuals. Submissions are judged by the organization’s Board of Directors against the criteria behind the award.

The first NAMEPA Marine Environment Protection Award was presented eight years ago posthumously to the founder of the MEPA movement, George P. Livanos who created HELMEPA over 30 years ago due to his interest and concern for the marine environment. Since then, award recipients have included Maersk, CLIA, Teekay, BSEE, Joe Cox, the American Salvage Association, and the Massachusetts Maritime Academy.

The NAMEPA Awards Dinner will follow the North American World Maritime Day conference on October 27th in New York City featuring RADM Linda Fagan. The agenda for the conference is in process. The awardees of the other NAMEPA Marine Environment Awards will be announced in September.

Tables for the NAMEPA Awards dinner, and tickets for the conference, may be obtained by going to www.namepa.net/upcoming-events/ or by calling +203 255 4686. Admittance is by reservation only and is limited.

The North American Marine Environment Protection Association (NAMEPA) was officially launched in 2007. “Save Our Seas” is the mission of NAMEPA which is an independent, marine industry-led entity that engages industry, regulators, environmental groups, educators and the public by promoting sound environmental practices. NAMEPA is a non-profit organization committed to preserving the marine environment through educating seafarers, students and the public about the need and strategies for protecting global ocean resources. For more information, go to www.namepa.net.

NAMEPA: Public Awareness Campaign for the World Maritime Industry and its Seafarers