Security in the Mediterranean… 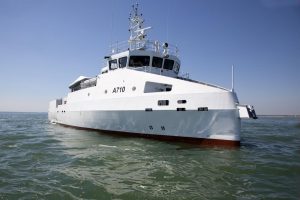 The official ceremony took place at Albarella (province of Rovigo). Built in just seven months as part of the agreement between Italy and Tunisia, the Zarzis A710 will be employed to stabilise the situation in the Mediterranean area.

Vittoria Shipyard SpA has delivered to the Tunisian government the training ship Zarzis A710, which will support diving and security works in air and sea areas of the Mediterranean. The vessel was commissioned by the Tunisian Defence Ministry as part of the Tunisian-Italian cooperation agreement signed in spring 2015.

The ship, which belongs to the Diving Support Vessel category, will be deployed by the Tunisian authorities as part of the stabilisation and pacification operation in North Africa and the Mediterranean area. In particular, the vessel will be used to train the students of the Zarzis diving school.

The official hand-over ceremony took place at the port of Albarella (Rovigo), in the presence of Admiral Abderraouf Atallah, Chief of Staff of the Tunisian Navy, Rear-Admiral Marcello Bernard, who was representing the Chief of Staff of the Italian Navy, and Rear-AdmiralGiuseppe Abbamonte, the head of Unit III Navarm-Defence Ministry. Welcoming the dignitaries was Luigi Duò, president of Vittoria Shipyard.

Vittoria Shipyard, based in Adria, is one of the largest constructors in Italy of medium-to-large professional ships, and built the training ship in just seven months. The Zarzis A710 is a 36-metre monohull, and can carry 12 crew as well as 18 divers. The vessel has a top speed of 17 knots (32 km/h) and a cruising speed of 12 knots. The vessel is equipped with a compression chamber; a system to produce, purify and store breathable air and therapeutic gas; and adiving bell that can take divers into the water up to 100 metres deep. The boat will also be equipped with a sophisticated DP2 positioning system that combines the push of the main propellers with that of the bow thrusters to ensure that exactly the same position is maintained. This equipment follows the main international standards and those of RINA, the Italian Naval Registry.

“The delivery of Zarzis A710”, said Luigi Duò, president of Vittoria Shipyard “consolidates our relationship of collaboration and mutual esteem with the Tunisian authorities. In the past, our shipyard has built and delivered twelve patrol boats to the Tunisian Navy and Coastguard. In general, we are consolidating our international presence. The recent agreement with SIMA Perù, a public company working in the naval sector, is the first step in a new path of internationalisation, based not just on building ships but also on the transfer of technology and know-how, for which we ask no national boundaries. ”

Viewers can log herebelow and see all the basic vessel’s details: