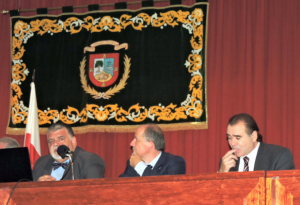 Capt. Antonio M. Padrón y Santiago, “IMO Maritime Ambassador” and Maritime Authority of Tenerife, participated in the Annual Congress of the National Association of Harbour Pilots, presenting a paper at the Round Table on “The professional development of Seafarers: A national matter”

The Congress was held in the Superior Nautical School of Santander (Cantabria) and the Round Table was moderated by Mr. Jose R. San Cristobal Mateo, Director of the Nautical School.

The discussion focused on the problems encountered by the Spanish nautical students to make their compulsory “training period at sea” providing solutions and exploring new possibilities from the preparation of legislative initiatives on the subject.

The IMO Maritime Ambassador also introduced the “Boarding Program for Maritime Students” which has been supported -since its creation- by both, the Superior Nautical School of Santander and the National Association of Harbour Pilots.

Is that the BDI’s …”coordinated” fall ?