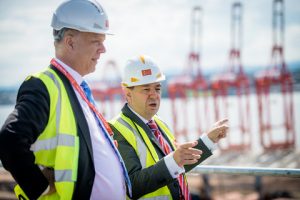 The new Secretary of State for Transport, Chris Grayling, visited the Port of Liverpool today (Friday 5 August 2016) to view the latest developments at its container terminal, Liverpool2.

The visit provided an opportunity for the Minister to view progress on the project, which started handling its first containers last month as part of trials ahead of a phased opening throughout the summer. The Liverpool2 project forms part of a wider £750 million investment programme into biomass, steel, port-centric warehousing and infrastructure by Peel Ports at its sites in Liverpool and along the Manchester Ship Canal.

The Minister met Peel Ports’ Chief Executive Mark Whitworth to discuss the importance of investment in the north and issues on transport integration and infrastructure improvements to improve freight connectivity between the port and major logistics centres. Once completed, the port giant’s developments will create jobs and contribute to the rebalancing of the UK economy.

Whitworth of Peel Ports, said: “We very much welcome the Minister’s interest, which maintains the government’s support for our efforts to facilitate UK trade through this key cargo gateway. The timing of the visit is particularly opportune given the recent arrival of the first containers at the port during our marine trials. With full opening now imminent, we will soon be able to offer companies ship-to-door access to the heart of the UK market via the biggest container ships in the world.”

Commenting on the visit Mr Grayling said: “The major investment we are making in transport across the North West will improve journeys for local people as well as helping industry grow across the region.

“This is part of our plan to invest in the North, and make an economy that works for everyone – not just the privileged few – by ensuring economic prosperity is spread throughout the country. Better infrastructure is likely to boost productivity.”

About Peel Ports and the Peel Group

Peel Ports is one of the UK’s largest port groups, owning and operating seven of the UK and Ireland’s most important ports. It handles 70 million tonnes of cargo every year. It is headquartered in Liverpool and employs around 1,200 staff. Peel Ports is part of the Peel Group, one of the UK’s foremost privately owned investment enterprises. Our strategy embraces a broad range of sectors – land and property, transport and logistics, retail and leisure, energy, and media, with assets owned or under management of more than £5 billion. Group investment policy is focused on actively managing our diverse portfolio, enhancing the quality of our assets and recycling capital over the long term.