Too close to call for Olympic debutants 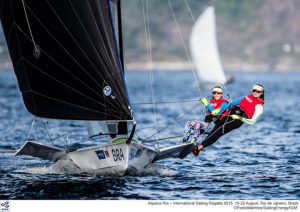 The Rio 2016 Olympic Sailing Competition will welcome the new, fast and intense 49erFX and over the Rio 2016 cycle, the Women’s Skiff has not failed to disappoint. By Richard Aspland – World Sailing

WATCH the fast and intense 49erFX in its natural habitat

New Zealand’s Alex Maloney and Molly Meech were the first to grab the world title in 2013 following the announcement that the 49erFX would be in Rio, and the occasion hasn’t been lost on Maloney as she explains the camaraderie throughout the fleet of Olympic newcomers, “The 49er FX is going to have its Olympic debut, that’s exciting for all of us. Our fleet is quite special, we are really good friends, and I think it’s good that we are going to experience together having the first Games for the fleet. It’s a cool opportunity for girls to showcase the class.”

“Our fleet is really close, it’s a new class so everyone has done jumps at different times during the last four years. There are six or eight good girls that can be potentially on the podium, so it is going to be highly interesting to see who comes out on top.”

As Maloney explains, the jumps have been evident throughout every regatta with no single team taking the class by the scruff of the neck, but that only makes for a more interesting spectacle for the watching public.

The current world champions hail from Spain and helm Tamara Echegoyen will be looking to take that title in to her pursuit of a second consecutive gold medal when she sails with Berta Betanzos, but it hasn’t been an easy transition for the London 2012 Match Racing gold medallist, “The Olympic goodbye for the Match Race wasn’t easy to get over psychologically. It’s not easy when you have won the Olympic Games and at the next Worlds you are in the second half of the leaderboard. But we were aware that the change needed some time and working hours. We haven’t focused just on the results, but on the general picture. London is the past.”

Echegoyen and Betanzos have had an up and down campaign but may have just hit their stride at the right time, and Echegoyen will hope that’s the case as she needs to replace her gold medal from 2012, “When I decided to leave the Match Race, I left the gold medal at my mother’s home.”

If Echegoyen is to claim gold, there is one team in particular they need to beat. They love the waters of Rio having won the two test events to be sailed there, and it just happens to be their home, Brazil’s Martine Grael and Kahena Kunze. To compliment those test events wins they also have the 2014 world championship title, previous Rolex World Sailor of the Year tag and that added extra only they can boast, the home nation support factor.

Italy’s Francesca Clapcich have Grael and Kunze just ahead of the rest at the moment, “Regarding the favourites, I think the 49erFX is one of the Olympic classes with the most strong and dangerous teams, the first being the locals. But, with variable conditions and light winds, there are so many teams with chances.”

Clapcich and helm, Giulia Conti will fancy their own chances as they are one of the other teams to hold a world title, which they won in 2015. Added to this, in a new fleet, experience could give them a much needed edge as many a great sailor has succumbed to the pressure of an Olympics Games, “It’s my fourth Olympics, but it’s the first time that I really feel being part of a team, and this is very important. The feelings are very positive and we like Rio,” said Conti.

“Apart from being one of the most beautiful cities in the world, it’s optimum also for the sailing conditions. We like the wind, we have learned to understand the currents and the fact of having spent some time on site makes us feel, nearly, at home. We are heading into this Olympics smiling and are aware of our chances, focusing on performing well race by race. If we are the best, we will win. If someone is better than us, then we still would have given our best.”

Annemiek Bekkering and Annette Duetz (NED) have been flying recently winning the 2016 Trofeo Princesa Sofia. Jena Mai Hansen and Katja Salskov-Iversen (DEN) are current European champions. Charlotte Dobson and Sophie Ainsworth (GBR) won the final Sailing World Cup before the Games. You could make a case for all in the fleet in one way or another. The only thing that you can say for definite is that there will be a new Olympic 49erFX gold medallist at the end of the Games.

49erFX racing will commence at 13:00 local time on Friday 12 August on the Aeroporto racing area