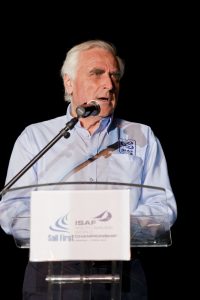 Years of planning, preparation and, at times, improvisation will culminate on Monday with the beginning of the sailing competition at the Rio 2016 Olympic Games.

Sailing enjoys a prominent place in Brazil’s Olympic history, as the country has won more gold medals in sailing – six – than in any other sport.  The 17 total medals won by Brazilian sailors are second only to the 19 won in judo.

The Rio 2016 Organising Committee has worked hard to prepare for this important moment and welcome the best sailors in the world.  As with any event of this magnitude and complexity, there have been challenges along the way – some of which have been significant.  The latest, of course, was the collapse of the boat ramp at Marina da Gloria, which occurred only a week ago.  But in true Carioca spirit, the Organising Committee went to work, improvised and found a solution – and, we are pleased to report, the replacement ramp is now in place and ready to go.

For our part, World Sailing has been supporting the Organising Committee in addressing these challenges whilst preparing to deliver an Olympic competition befitting the world’s most accomplished sailors – athletes such as Brazil’s Robert Scheidt, a national hero and five-time Olympic medalist who is aiming to become the most decorated sailing Olympian in history.  Our preparations are nearly complete and we are ready to welcome yet another cast of sailing heroes when competition begins on Monday.

Quite rightly, a great deal of attention has been focused on water quality in and around Guanabara Bay. Improving water quality has been, and should remain, a top priority for the various environmental and governmental bodies that carry out this important responsibility in Rio de Janeiro.

During the past year, there have been visible and measurable improvements to the water quality in Marina da Gloria and Guanabara Bay.  For most of the athletes and coaches who are now in Rio preparing for Olympic competition, this is not their first time sailing on the bay, and they too are reporting a noticeable improvement.

That said, World Sailing has no greater priority than protecting the health and well-being of athletes.  For that reason, carefully assessing water quality will be a point of emphasis throughout the Games.  It is worth restating the measures we will take in Rio to ensure this is the case:

Every morning, our medical and technical experts will examine the latest testing data provided by the government to make certain the conditions are safe and acceptable.

The standards we will use for Guanabara Bay are those established by the World Health Organisation for primary contact.  This information will be shared with the team leaders and coaches every morning.

In the event of substandard conditions, we have a number of contingencies in place, including alternate racecourses and launch areas.

Also, every morning, our World Sailing technical experts will examine the race areas from the air with Rio 2016 Organising Committee personnel to identify any potential trouble spots and, if necessary, make adjustments.

Given the popularity of the sport in Brazil, and with iconic Sugarloaf Mountain as a backdrop, the sailing competition at Rio 2016 has the potential to be one of the signature events of these Olympic Games.  We invite everyone to visit Flamengo Beach and enjoy watching the world’s best sailors as they test their skills in pursuit of Olympic glory

Too close to call for Olympic debutants