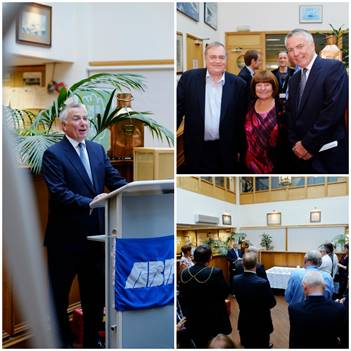 ABP Regional Director Humber, Simon Bird has called for the region to grasp what he calls a ‘unique opportunity’ as the Humber prepares to make its voice heard in the Northern Powerhouse debate, following the appointment of Brigg and Goole MP Andrew Percy to the role of Northern Powerhouse Minister.

Speaking to a group of business leaders and local authority representatives Mr Bird stated that an agenda largely driven by the North West would require ‘a concerted and collaborative effort on the part of business and local authorities across the Humber to ensure we achieve the best possible outcome for the region.’

Assembled guests, which included Labour peer Lord Prescott and Chief Executive of Hull City Council Matt Jukes as well as many ward councillors, local Mayors and council officials, heard how ABP intended to lead the charge for the Humber as its Humber ports are key economic drivers not just for the north, but for the entire UK.

“As the North’s gateway to Europe and beyond, ABP’s Humber ports have a major role to play,” said Mr Bird. “No other northern port region is better placed to meet the economic agenda laid out by Transport for the North:  focussing on offshore and renewable energy and advanced manufacturing.

“Transport for the North recognises the role of the Humber ports in meeting both agendas and the importance of improving road, rail and barge infrastructure to ensure it fulfils this role.

“No other region provides the same international connectivity, with concentrated container and roro capacity across the estuary to meet the needs of northern industry and manufacturers. Immingham, for example, is capable of handling the largest bulk vessels on the East Coast and is well placed to support growth in industrial development in energy, construction and agriculture, amongst many other sectors.”